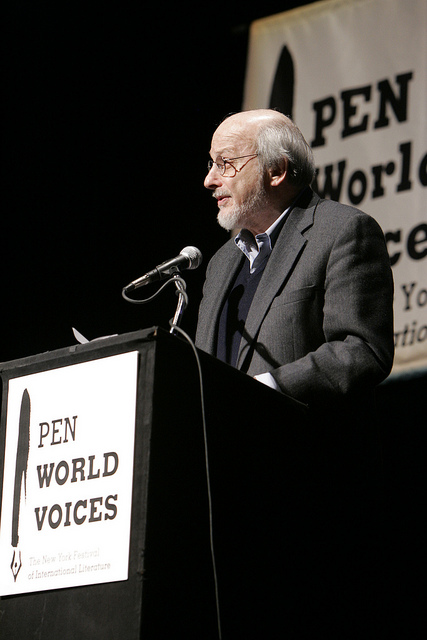 “Fiction is democratic. It reasserts the authority of the single mind to make and remake the world.”
—E. L. Doctorow

PEN American Center mourns the passing and celebrates the life of acclaimed author E. L. Doctorow, who died yesterday in Manhattan of complications from lung cancer at the age of 84. Throughout his life, Doctorow was a fierce advocate for free expression and an avid supporter of PEN. We are unendingly grateful for his service on behalf of the organization and writers worldwide.

Best known for inventive novels such as Ragtime and The Book of Daniel, which expertly interweave personal and familial narratives into broader historical contexts, Doctorow was one of America’s most respected contemporary authors. He won the National Book Critics Circle Award for fiction twice, for Billy Bathgate and Ragtime; and was twice a recipient of the PEN/Faulkner Award for Fiction, again for Billy Bathgate and for The March. In 2012, Doctorow was awarded the PEN/Saul Bellow Award for Achievement in American Fiction.

An ardent critic of censorship, Doctorow served as a board member and as a judge for the PEN Literary Awards, participated in readings and the World Voices Festival, and attended rallies on behalf of persecuted writers. The author embodied the spirit of PEN as both a literary and human rights organization, even when he didn’t necessarily agree with its decisions (as when he famously signed a letter, along with 65 other writers, opposing the invitation of Secretary of State George Schultz to address the 1986 PEN Congress in New York.)

For a 2009 rally demanding the release of Chinese dissident writer Liu Xiaobo, Doctorow traveled in a snowstorm to remind participants of the importance of such action: “Such events as this have been necessary for as long as I can remember. PEN Members marched around the Czech embassy to protest the jailing of Vaclav Havel. Twenty years ago, we rose in judgment against the fatwa applied to Salman Rushdie.” He also read from Charter 08—the 2008 declaration calling for political reforms, greater human rights, and an end to one-party rule in China—and a poem by Liu titled “One Letter.” In 2011, Doctorow joined other notable writers on stage in support of the embattled Belarus Free Theater, reading most memorable from City of God (video below), and in 2013, he rallied writers to protest the widening surveillance of the NSA.

Consistently at the forefront of American letters, Doctorow’s political engagement as a writer—as when he decried the lack of outrage over the NSA revelations—is a testament to the political heft of his historically minded fiction. In his 2009 address at PEN’s Literary Gala, he said: “So when we stand against the suppression of writers in China or Uzbekistan, in Serbia or Egypt or Vietnam or Zimbabwe, we are defending ourselves, because this is a disease that is catching. Just as torture as a government policy is catching, just as the secret reading of emails and illegal tapping of telephones is catching, just as dismissing international treaties with contempt, is catching…It is why, I have said ‘to write about the past is to write about the present.’”