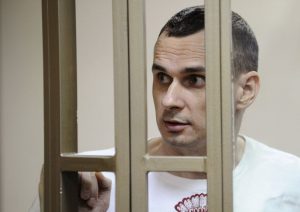 July 13 marks the fourth birthday that Ukrainian filmmaker Oleg Sentsov  has spent incarcerated on charges trumped up to silence his opposition to the Russian annexation of his native Crimea. Many more could follow in his Siberian prison unless the Russian government reverses the 20-year sentence imposed for terrorism allegations that human rights groups have dismissed as fabricated.

Sentsov has said he was tortured after his arrest and transfer from the Crimean capital to Moscow, and he was convicted in a Russian court on the basis of testimony from a key witness who later retracted his confession, stating that it had been given under torture. Appeals of the original verdict were rejected by the Russian Supreme Court in November 2015 and June 2016. A request for Sentsov’s extradition to Ukraine was denied in October 2016 on the grounds that he had become a Russian citizen upon the annexation.

Filmmakers and human rights activists all over the world have stood up for Oleg Sentsov. On April 25 PEN America honored Sentsov with the 2017 PEN/Barbey Freedom to Write Award at the annual PEN America Literary Gala. See more about our previous action on his case here.

PEN America encourages you to:

Remember to let us know about your activities and to send us reports about them so that we can share them with others.