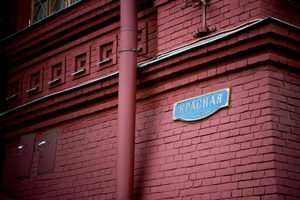 Leading up to and throughout the Sochi Winter Olympic Games, we will be exploring through poetry, fiction, and nonfiction the implications of growing restrictions on freedom of expression in Russia since President Putin returned to office in 2012. The pieces were written for a special issue of The Dissident Blog, published by Swedish PEN.

In this piece, Maria Chichtchenkova, the coordinator of Front Line Defenders, writes about how Putin’s Russia is now trying to build an alliance with countries like Iran in order to, among other things, stop LGBT people from being recognised as full citizens. “Traditional values” get the same old spin.

The Russian Federation experiences a huge variety of human rights violations, such as absence of rule of law, widespread use of torture in army, police and detention facilities, overcrowded prisons with hideous conditions of detention, numerous and systematic violations of social and environmental rights and discrimination against minority groups. It is almost impossible to find a human rights issue that does not have its appalling illustration in Russia, and endemic corruption and impunity are major structural problems affecting the whole situation. In its 2013 Corruption Perception Index, Transparency International ranks Russia in 127th place out of 177 countries, which gives it the same score as Pakistan, Azerbaijan, and Gambia. The 2014 Sochi Winter Olympics, which are attracting international attention to the human rights situation in Russia, is a revealer: corruption has made this event the costliest ever in Olympic history. In the immediate vicinity of Sochi, in Russian North Caucasus, there is no rule of law, with Dagestan being an epicentre of violence and the starting point for terrorist attacks led by Islamist insurgents. The authorities’ response is repression, including unlawful detentions, summary executions of suspects and collective responsibility for the families of the insurgents. The stability of Ramzan Kadyrov’s totalitarian regime in Chechnya benefits from the unconditional financial and political support from the Kremlin and the fact that impunity for the violators of human rights is guaranteed.

Preoccupied by their international image, the authorities perceive Russian human rights defenders who denounce human rights violations as troublemakers. Lately, a campaign of marginalisation of human rights defenders has been organised under the ‘Foreign Agent’ Law passed at the end of 2012. The law requires that all organisations receiving foreign funding and involved in so called ‘political activity’ should register as ‘foreign agents’, a term that is reminiscent of the Cold War. The extremely vague definition of what political activity is has allowed the authorities to submit a thousand organisations all over Russia to inspections and to bring dozens of them to court, de facto paralysing their human rights work. It has also given a green light to a smear campaign in state-controlled media against civil society groups, presenting them as ‘grant eaters’ and promoters of Western interests. In April 2013, in an interview with the German media company ADC, President Putin claimed that Russian NGOs had received 1 billion USD during the first four months of 2013. Although this amount was later revealed to be entirely fanciful, it had already been widely spread in the media. The logic seems simple: those accusing the authorities of corruption are themselves paid by foreigners for doing so, and criticism of human rights violations aims not at improving the situation but at blackening the image of the country. Moreover, Russian officials, hoping to turn the attention of the citizens away from internal problems, are looking for a new state ideology that would attribute to Russia a ‘civilizational mission’ promoting other values than the concept of human rights, which is targeted as an ideology serving Western hegemony and imposing values hostile to Russian society.

The implementation of this concept has been worryingly illustrated by the Pussy Riot case, in which young women were accused of disrespecting Russian traditions and culture following their political performance in a church. In the same spirit of respect for traditions, a new ‘blasphemy law’ was passed in June 2013, allowing jail sentences of up to three years for ‘offending religious feelings’. In November 2013, MP Elena Misulina, author of anti-LGBT legislation, proposed to introduce to the Preamble of the Russian Constitution a reference to orthodoxy as the basis for Russian national and cultural specificity.

The offensive of ‘traditional values’ is perhaps reflected at its utmost level in the fight against the rights of the LGBT community. In June 2013, the Russian Parliament adopted in two final readings a federal law banning ‘propaganda of non-traditional sexual relations’ among minors. The bill was adopted by an overwhelming majority of 436-0, with one abstention. The text does not provide a definition of ‘non-traditional relations’, which are only described in opposition to ‘traditional family values’, but it dupes nobody, as this bill passed in its first reading under the headline ‘propaganda of homosexuality among minors’. Propaganda is described as spreading information in order to form non-traditional sexual desires in children, describing such relations as attractive, promoting a distorted understanding of the social equality of traditional and non-traditional relations and through unwanted exposure to information that could provoke interest to such relations. Similar legislation was adopted earlier in the year in a number of regions and municipalities, including the city of St Petersburg, where the city parliament adopted a law banning – in the same sentence – ‘propaganda of sodomy, lesbianism, bisexuality and transgenderism, and paedophilia to minors’. In addition, a draft bill allowing children to be taken away from homosexual parents was introduced to the Duma, before being withdrawn for ‘improvements’.

Despite the fact that this legislation has not, to date, been applied, numerous events organised by LGBT groups have been attacked by right-wing organisations or religious extremists, with no real protection by the police. The consequences of the intolerant, even openly homophobic, speech adopted by Russian authorities have been disastrous for LGBT people, with a dramatic increase in attacks and physical assaults against them. Homophobic internet communities now call on their members to track LGBT people down and even to pressure homosexuals to commit suicide. Several videos of humiliations and beatings of teenagers, just because they are homosexuals, have been published openly. The authorities have failed to show their willingness to find those responsible and bring them to justice.

The so called ‘traditional values’ are in reality antithetical to tolerance and human rights. The notoriously homophobic journalist Mr Dmitry Kisilev, who declared on television that in the case of accidents, the hearts of homosexuals ‘should be buried in the ground or burned as unsuitable for the continuation of life’ has just been appointed by President Putin as the head of a newly created Russian news agency. In December 2013, in his annual speech to the nation, President Putin presented Russia as the world’s last bastion against countries bent on destroying traditional values, which would defend itself against ‘genderless and fruitless so called tolerance’ that allows ‘good and evil’ to be equal.