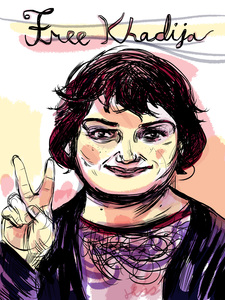 Khadija Ismayilova’s trial came to a halt today in Azerbaijan as prosecutors requested a nine-year prison sentence for the investigative journalist on trumped-up charges of economic crimes. Immediately after the sentencing request, the judge adjourned the hearing until August 26. A verdict in the case is expected at the next hearing. Ismayilova has accused the court of rushing through her trial, which has lasted less than four weeks after a lengthy 7-month pretrial detention.

Repressive governments and politicized judiciaries have often scheduled important milestones in human rights cases for moments when international governments, media workers, and advocacy organizations are at minimum capacity in an effort to avoid increased scrutiny. China sentenced Nobel Peace Prize Laureate Liu Xiaobo to 11 years in prison for his writing on Christmas Day in 2009 in hopes that reporters and activists would turn a blind eye. The end of summer, when many in the northern hemisphere traditionally take holiday, is no exception. This aggressive tactic highlights the spurious nature of the charges against Ismayilova, the farcical progression of the trial, and the government’s determination to punish her for exposing official corruption.