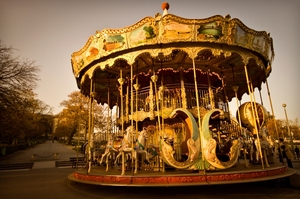 This week in the PEN Poetry Series, guest editor Cathy Park Hong features a poem by Joyelle McSweeney. About McSweeney’s work, Hong writes: “Reader, be prepared for the deranged, full throttle force of Joyelle McSweeney’s ‘Dead Youth, or The Leaks.’ Winner of the Scalapino Prize, McSweeney’s verse play ‘Dead Youth, or The Leaks’ is The Tempest recharged into a global picaresque tale about our favorite baby-faced villain, Julian Assange, who hijacks a containership of dead youth until he is thwarted by a band of Somalian pirates. This is internet piracy meets real world piracy. I’m thrilled to excerpt the play’s prologue, which is narrated by Protégé, an African American author/mother who died ‘a howling death of cervical death in the colored ward of Johns Hopkins, Baltimore 1951.’ Originally played by the poet Tonya Foster, this beguiling undead character is both tragedian soothsayer and narrator who beckons us into our toxic Anthropocene epoch.”

[PROLOGUE is a thirty-year-old African American woman dressed smartly in 1940’s attire. She stands in a three-quarter pose and holds herself with dynamic, compact self-saturation.]

PROLOGUE: Hello I am your Prologue. Also known as Protégée.
My hair and blouse are neatly pressed,
my locks curled, as if ‘dancing towards my face’.
My nails are short but red without a chip
and because I am a mother
I have to work in death as I did in life.
You will note I hoist a Petri dish, that’s for illumination.
And an iPhone, that’s for voyeurism.
And a tabloid, that’s for  tourism.
And a water bottle, that’s for cash.
With the water, in my GI aspect,
I buy the hearts and minds of the local children
unless they slip under the wheels of the Humvee, reaching for it.
Then they are rendered into the eternal ranks of DEAD YOUTH
and join the dead insurgents and GI’s.
DEAD YOUTH are the dark energy of this play.
They propagate a field in the void, an inverted Internet,
a compound interest that tugs information through dark portals
chased by government men. In death they find no rest
Decoy, decoy, and then….
Target Interface. They blow up again.

As the play begins, these DEAD YOUTH [gestures to a spotlit clump of sleeping, tracksuited teens]
are all adrift on a disabled container ship
the MV Alabama Maersk, AKA Her Majesty’s Infamy,
The Merchant of Venice, AKA the SS Smirk.
It has been oe’rmanned by three unlucky hijackers:
Julian Assange, blonde Internet villain, and two more about to be revealed.
These men pursue their separate interests at first unknown to each other.
And as the ranks of  DEAD YOUTH are continually added to
they swell the Smirk’s corroded walls with baby testosterone,
nylon jackets, hair cuts, body odor and antibodies.
If they do not dock soon, the cell will lyse.
The entire vessel will capsize.
This play is really about them.

Lord this lantern is HEAVY.
But it casts a clear black light.
That’s the light the dead see
in their nightclub: the Dead Cat.
It’s sharp as a stilletto.
It brings the secrets to light.
Guess what: we’re living in a declivity
Called the twenty-first century.
None of us occupy a very terre haute now.
Every Sublime gotta have its rock bottom
every Mont Blanc its chasm
every blanc mange its spasm
every icy berg its lower berths.
To bear the damage.
That’s me. That’s thee, S.V.P.
I’m new here, to the twenty-first centuree, encargoed
with the fiji mermaids, hunger artists,
hottentott venuses, Jackson whites,
and those with the falling disease.
Oh My Anthropocene. My New Found Land.

Well, as they say, you can’t choose your family,
Un coup de dés jamais n’abolira le hasard.
Our electric’s been cut off.
Our ISP contract’s been voided
Our satellite doesn’t know us anymore.
We’re steering upstream on Death’s current
We are steering the ship
by starlight, on sheer infamy.
We are steering it with celerity, on sex drive, on instinct,
which means
we are steering it in a dream.
Close the shutters.
Take the marquee down. This Bates Motel
with its dead birds and killer boys inside
shall sail on,
marooned in night!

Did I mention my name is Henrietta Lacks?
All that you know about polio, space travel, most drugs,
how to make cells split in a fingerbowl forever
you know because I died a howling death
of cervical cancer in the colored ward
at Johns Hopkins, Baltimore, 1951.
When they autopsied me,
I wore a white nightgown of malignant pearls
inside my body, as if I were a Queen that had swallowed my own crown
or a demented bride with her own cake sewn up inside.
Those bad cells went on doubling after my death
doubled and were sold off to labs and doubled again
suffered the rest of the twentieth cee without me
suffered spaced travel,
suffered bombs, made mice sick, wore makeup and took drugs.
I was immortal in my ability to be knocked down
and spread myself out to take the punch again.
In this sense I am still a mother.
I am forever taking the punch  in the gut.
No one asked for my consent.
And now the author of this play forces me
to stand up here and say these words:
Un coup de des jamais n’abolira
My body is this ship.
My body is this play
My body is gravity
rocking this ship
in the belly of the play
rocking this ship
in the belly of the play
the play rides inside of me
as a thought rides inside a thought
as a triply encrypted message in a junk envelope
dances around the Internet with unnatural suavity
it arrives on the inside of a second
& reveals a second to have an inside
a dark interstices made of undecidability.
—made out of me.
I have had to invent the whole world for you
once again from scratch:
rocking this ship
in the belly of the play
in the belly of the ship: flip flops, guns, “relief supplies.”
in the belly of the play
a grifter, a pirate, a poser, DEAD YOUTH.
DEAD YOUTH are really the subject of this play.
Did I mention I am a mother?
Did I mention I am a mother?
A dead mother, a dead mother
A black electrick energy blooms from me.
I’ve smuggled it here from the twentieth cee.
Did I mention I am a mother?
I am. It’s Mother’s Day.
From now on I am the author of this play.