Works of Justice: How to Write a Novel in a Month (During a Pandemic) 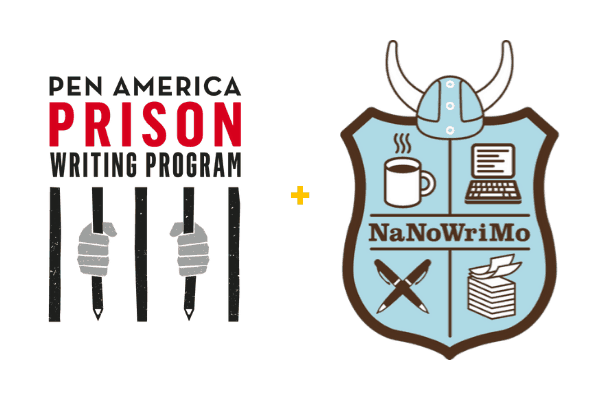 Writing a novel is hard work. Writing a novel in prison is even tougher. And amid a pandemic, when people on the inside are limited in their day-to-day activities, the sheer act of writing can be monumental. That’s why we were floored to have 10 incarcerated writers in four facilities this year participate in National Novel Writing Month (NaNoWriMo), an ambitious writing challenge in which participants write the first 50,000 words of a novel in just 30 days.

This November, the Prison Writing team facilitated our second annual collaboration with the NaNoWriMo team. Through daily writing sessions and by building community with others also taking on the challenge, writers develop their storytelling skills, sharpen their craft, and connect with other writers.

Unlike last year when we successfully piloted the project with 14 writers, many of our participants in 2020 were unable to meet in-person with other members of their writing pods who live in the same facility, left to write alone in their cells, and unable to confer with fellow writers. Others were moved around to crowded, unfamiliar units in their facility as part of the prison officials’ plans to contain and combat COVID-19.

Derek Trumbo, a returning participant and NaNoWriMo peer facilitator, said although the experience was different this year, the members of his writing pod were deeply committed to their work, and to each other.

“When my fellow writers would sacrifice sleep to join me at the table to write at 4am in order to do our writing before the crowds and noise started, I knew that everyone was serious about staying healthy and focused during COVID,” Trumbo said.

To help ease the difficulty of this isolation, and to create inroads for our writers inside to be a part of the larger NaNoWriMo movement beyond the walls, we connected each one of this year’s participants to a volunteer on the outside with whom they could correspond throughout the month. Though we use the language of volunteer/mentor interchangeably in this project, our approach was to introduce each pair as literary peers, rather than frame the experience as  all-knowing, esteemed writers mentoring inexperienced students. Participants overwhelmingly told us that these connections facilitated an enriching and meaningful NaNoWriMo amidst a difficult prison environment. It was equally impactful for those isolating on the outside.

“I began the month wanting to participate in some of the community-making that keeps me accountable as a writer, as well as connected as a human being, and I found that I did not just take part in making that; I was given it. Or rather, we made that together. That feels really good and true,” said Julia Hannafin, one of this year’s volunteers.

Though the partnerships were initially created just for the month, almost every writer will be working with their volunteers past November, gearing up to edit and polish their novels in the coming months. In that way, our second NaNoWriMo helps expand our program’s central tenet of creating a literary community in which incarcerated writers are viewed as writers in their own right.

Below, we have highlighted some reflections from this year’s participants and volunteers, discussing the partnerships they built over the past month, and how they approached NaNoWriMo in such a particularly daunting year.

“The most challenging aspect of this year’s NaNoWriMo challenge for me was fighting to put forth a truly good story, writing the second installment in my fantasy fiction trilogy that I began with last year’s NaNoWriMo that rivals, yet compliments the last book that I wrote. The deepening of the world that I have created, as well as the characters that inhabit it. The greatest reward by far was to finally finish a full draft of the manuscript (106,355 words!) in just 21 days of actual writing. . . it feels so very rewarding to set goals for oneself and to meet those goals. The NaNoWriMo challenge is a fantastic proving ground, not only of our ability to put forth our craft under the most adverse of conditions but to show us what we are capable of achieving, if only we apply ourselves.”
—William Daniels, participant

“The most challenging element of this year’s NaNoWriMo was finding the tablespace to write. I live in a 50-plus man wing (pod) that only has two tables for use, and as there are no laptops or computers, my entire group writes with pen and pad. The most rewarding was my fellow writers checking their JPay messages and finding validation through outside writers who genuinely cared about what they had to say.”
—Derek Trumbo, participant

“As you know, this year’s NaNoWriMo was made even more difficult due to our current pandemic crisis. It was really encouraging to know that there was/is a supportive community of writers who will weather the storm at all costs. As an incarcerated person, writing at this time proved to be very difficult. As a health precaution, I had to be constantly moved in efforts to combat this virus. As uncomfortable as it was, these moves proved to be effective, and as such, no one is currently sick. Despite these impediments, I was very much encouraged by my writing mentor. I found myself thinking about my project at various times throughout the day, thanks to her prompts.”
—Mohammed Monsuri, participant

NaNoWriMo is an intensive writing challenge that can test a writer’s stamina, skill, and creative flow. As a participant, how did you approach this year’s NaNoWriMo—especially given the restrictions at your facility due to COVID-19, if there were any? As a volunteer, how did you approach accompanying a fellow writer as they took on this challenge during this particularly difficult year?

“I approached this year with the mentality that the project I start is going beyond one month, I’m going to write from within me and not just for the sake of creativity, and I know that I will not rest until I have completed it and give it an effort to where maybe it’s not your cup of tea but you’ll respect it.”
—Andrew Phillips, participant

“I went into the program thinking little about 2020 and took focus on Moe. We were all impacted by COVID, and I’m kind of over it right now. I didn’t want to use my time with Moe expressing thoughts and beliefs about something we can’t control. Since we are so swallowed up in it anyway, I was hoping our exchanges would serve as an outlet to the fact that he’s in prison. Once COVID subsides, he’s still locked up. Moe had limited access to write to me, so I offered that he share what he could about himself as well as his project. The personal stuff that he sent can serve as moldable content for his draft. I was able to learn a lot about him as a human, and in turn, an author.”
—Stephanie Tobia, mentor

This year, we sought to include an additional connective element to the challenge by connecting each writer with a volunteer mentor with whom they exchanged ideas and drafts. What is something you learned from your mentee/mentor this month?

“Megan was a wonderful mentor. Her experience, insight, and willingness to give her time and expertise was the validation I needed to complete the project. If she could give me her time, I could damn well give her my best. Her advice on dialogue was a major benefit. She told me that I should be able to remove the “he said and she said” and still be able to determine who was talking. This helped me focus on creating real individuals. She also asked good questions that helped me correlate real-world experiences into my characters again, giving them a unique dimension.”
—John Mudd, participant

“Dedication is truly what matters and makes a writer. One might assume that incarcerated artists have increased time to write with far less distractions, but quite the opposite is true. I learned that the fight for creatively compatible spaces often overrules the willingness to write when time does allow. Thus, the sheer mental fortitude it takes to be productive and creative no matter what, in an already mentally tough environment, is so much more admirable knowing the monthlong race isn’t just against time but space.”
—Megan Geer, mentor

“One thing was Derek confirmed what I already thought, which is that harm doesn’t come from nowhere and that everybody deserves to be listened to and have their full stories told. But besides that, Derek taught me that few things are more important to our humanity than the space to express yourself and be heard. Even in the most oppressive of spaces, we all have the capacity to maintain freedom of thought, which is a power inherent to us, and the realization of that power is the only way we will be able to heal on a macro scale.”
—Nicole Grennan, mentor

Connecting the writers we work with to the literary community outside the walls is central to our work at the PEN Prison Writing Program. Did this experience change or shape how you conceive of literary communities you would like to be a part of in the future?

“It definitely did. I think it changed my image of to whom I could connect, with whom I could share a common ground. To whom I could be useful, and who could be useful to me. Sometimes I feared that I wouldn’t be able to give Billy the feedback or encouragement he needed—who am I to know about his experience and what he requires? Perhaps it was tempting to imagine it’s easier not to try, to shrink instead of attempting and failing. I’m glad to have attempted and to have been made better for it, as a thinker and a writer. My ideal literary community exists outside of academia, in relation to real people who have a dedication to their craft and themselves.”
—Julia Hannafin, mentor

“Participating this year confirmed and amplified the value of such programs, not just for our incarcerated communities, but for me, particularly in humanizing my fellow writer as opposed to the traditional, destructive narratives from which corrupt systems of power benefit. This program empowered me to continue to positively impact incarcerated communities with my own love and passion for writing. Ultimately, it illuminated our shared humanity.”
—Sahar Mustafah, mentor

“Much of my early exposure to a literary community was within writing workshops, which are notoriously competitive, often in ways they don’t need to be. Workshops work toward establishing a hierarchy instead of camaraderie or encouragement. Working with an incarcerated writer is a helpful experience for any type of professional writer, but especially one who has come of age writing in a world marked by workshops or competing bylines. As a mentor, you have to enter into a correspondence with an incarcerated writer adequately aware of your difference in privilege and resources, where sometimes one writer cannot even type on a computer, only has access to limited literature, or time restrictions. The emphasis is less on competition, but instead, mutual encouragement. I found the process to be filled with much more open and vulnerable discussion about being writers and the craft of fiction. It’s a welcome alternative from the many spaces I grew into my own role as a writer within, where writers are often trying to outwrite each other.”
—Sarah McEachern, mentor

Bangladesh authorities are facing calls to release a Rohingya man arrested while photographing the transfer of refugees to a controversial island camp this week. https://bit.ly/2LlmWLu

A stand-up comedian in China suggested that some men had an unwarranted confidence. An attempt to censor her followed. https://nyti.ms/3b8UDdZ

Voting matters -- GO VOTE GA. Check out our "Elections & Emotions: Voter Trust in GA" discussion on why building trust for Black & Latino voters is so critical in GA. Brought to you by @PENamerica @BorealisPhil @Georgia_NAACP @UnivisionNews @jamalhbryant. https://www.youtube.com/watch?v=mHaY2p7XTdw&list=PLrEwhHMtkH2CLkXv2gcmR-vrVIWLdNE0r&index=3