“The Interview” will open on Christmas after all.

Sony Pictures Entertainment confirmed Tuesday that the film will have a limited theatrical release across the United States beginning Thursday.

“We have never given up on releasing ‘The Interview’ and we’re excited our movie will be in a number of theaters on Christmas Day,” Michael Lynton, chairman and CEO of Sony Entertainment, said in a statement. “At the same time, we are continuing our efforts to secure more platforms and more theaters so that this movie reaches the largest possible audience.”

The Alamo Drafthouse in Texas and Atlanta’s Plaza Theater had said they would begin showing “The Interview” before Sony’s confirmation.

Sony announced last week it had called off the scheduled Christmas release of the North Korea satire which depicts the assassination of dictator Kim Jong Un following hacker threats of violence against theaters showing the film.

Rushdie, a former PEN president, faced dire threats 25 years ago after the publication of “The Satanic Verses.” The novel was condemned as blasphemous by some Muslims, and Iran’s Ayatollah Ruhollah Khomeini called for Rushdie’s death. The PEN petition noted that “The Satanic Verses” continued to be published and sold.

The FBI has said the attacks on Sony came from North Korea.

Stars of the movie Seth Rogen and James Franco responded to Sony’s decision on social media. 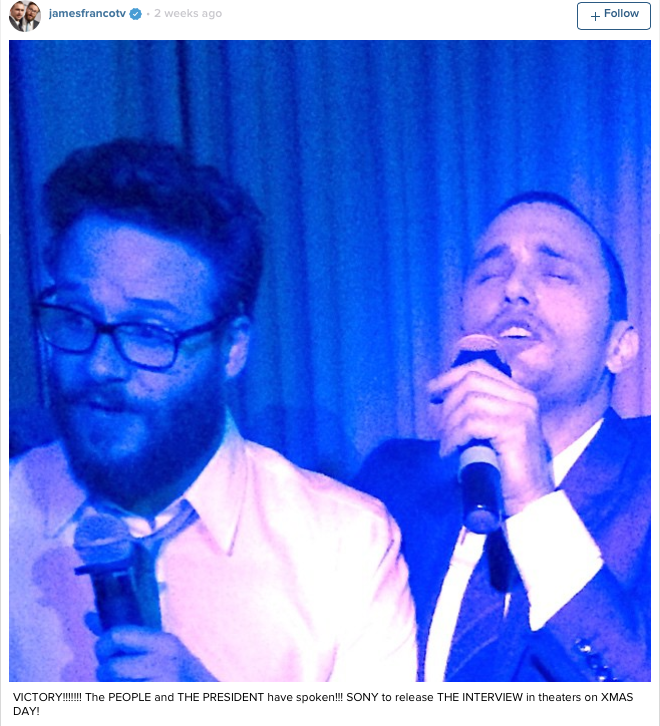