You may not think Chimamanda Ngozi Adichie and Trevor Noah have a ton in common besides a continent of birth. One is an accomplished fiction author from Nigeria who’s also known for her writings and speeches on feminism. The other is a comedian from South Africa and the host of The Daily Show. But in conversation last night in New York City, for the PEN World Voices Festival, the two discussed how their multiple identities shape their views of the world, and how they balance adapting to new communities and staying true to themselves and their work.

Moderator Chris Jackson dove in by asking how their reaction to November’s election was informed by their cultures and identities, to which Adichie replied, “All of it.” They agreed that this presidency feels like a test for American democracy, and, said Adichie, “There’s an American discomfort with discomfort.” She saw Americans striving to find the bright side of things. But from her perspective, “there’s very little case for optimism.” Noah, on the other hand, did find optimism, watching people who were never galvanized into politics finding ways to take a stand. 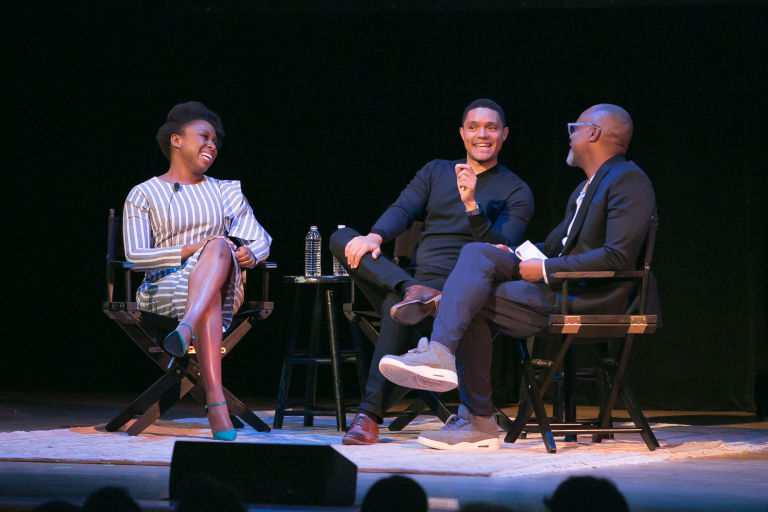 Noah attributes his ability to find optimism to similarities between South Africa and the United States. “The U.S. is a weirdly familiar place for me. It’s like an episode of Black Mirror,” he said. Both countries are places where Black people have faced severe oppression, and are “melting pots” of different cultures and ideas. And Noah, as the child of a white father and a Xhosa mother, understands firsthand what it’s like to be caught between multiple identities, and how nothing in the world is, to put it crudely, black-and-white.

One thing the two agreed on was the struggle with American Blackness. Adichie spoke of “discovering I was Black when I came to the U.S.” In Nigeria, she said, ethnicity and religion were identities, but she never thought of herself as anything but Nigerian, and early on in the United States she bristled at being called Black. But she recalled a moment in college in America where a professor praised an essay, and after asking who wrote it, seemed shocked to discover it was her. “I’ve understood race as an American understands race and Blackness,” she said.

At the beginning of his new book, Born a Crime: Stories From a South African Childhood, Noah prints the Immorality Code of 1927, which punished sex between white and Black people in South Africa with jail time. His mother hid him for the first years of his life, worried they’d be found out. And it was clear his multiracial upbringing gave him a critical eye toward all conversations about race. “I’ve experienced Blackness in all its forms,” he said, and rejected the idea that there is such a thing as one Black culture.

“Where in the world are Black people on time?” joked Adichie.

But how to communicate these identities—Black, multiracial, Nigerian, South African, Pan-African, global—in a way that connects you to those who don’t share them? Adichie said in her fiction she refuses to tone down her references for an assumed white audience. She will use complicated Nigerian names and slang, even when editors suggest using names that are “easier to pronounce.” And if somebody doesn’t want to pick up the book because the language is too hard, so be it.

Noah takes a different angle in comedy, where the art is in provoking an immediate audience reaction. In America, he said, he learned to cater to different audiences. He describes the first time he played to a white-majority audience, and how they laughed even harder at his jokes than at Black clubs. “It took me too long to realize, but in the Black room, we would laugh at our things. In the white room, I gave them license to laugh at the Black things.”

The reason questions of identity come up so often in art is because the fundamental point of art is to be consumed. Books have no power if they are not read. Comedy can’t change minds if no one can hear it. Many assume that to make art consumable it must be relatable, and to be relatable it must be broad. But broadening the message at the expense of the identity at its core dilutes it. It may be consumed, but to no greater purpose. “Specificity is what is global,” said Noah, but the goal is learning just what experiences everyone shares, even if the details are completely different.

“People are surprised they connect with my characters,” said Adichie. “And men are surprised they liked a book written by a woman.” That surprise illuminates the privilege of thinking only one type of story is allowed to be “universal.” After all, white authors aren’t asked to change the names of their characters to appeal to African or Asian markets. The assumption is that the specificities of nonwhite, non-Western life cannot be universal, and that anyone else has to change themselves to be heard. But, for both Adichie and Noah, diluting themselves is not an option.