In the world of travel, anyway.

Sending under-appreciated scribes into a frenzy of ecstasy across the United States, Amtrak is launching an official residency program for writers on its long-distance routes.

That minor earthquake you just felt was the rumble of several million freelancers scrambling for their computers.

Writers are now able to submit applications to drop everything in their lives to focus on their writing while getting gratis rides on Amtrak’s most scenic routes.

All thanks to a playful tweet from a freelance writer.

It’s the most positive wave of publicity Amtrak has had at least since Joe Biden’s last railroad rhapsody.

The writer said he’d written his novels on trains and enjoyed doing so.

“I wish Amtrak had residencies for writers,” Chee said.

Gross and a friend promptly tweeted the quote at Amtrak.

In a shocking plot turn, Amtrak tweeted back: “We’d need a test run. You two up for a trip to Chicago and back?”

The stunned Gross quickly agreed and Amtrak soon arranged a free writing trip for her from New York to Chicago and back.

Writers nearly broke their keyboards with excitement once the news hit social media after Gross tweeted out about the ride at Amtrak’s request.

Who knew so many writers did their best work on trains?

The romance of rootlessness 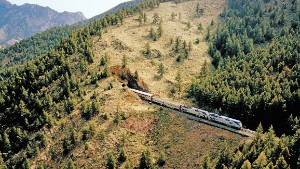 The next amazing chapter unfolded when Alexander Chee announced his own Amtrak residency.

Chee says he was “blown away, absolutely amazed” by the sensation inadvertently brought about by his interview.

“I’ll be working on my third novel, using the residency as a chance to just live inside it for four days straight,” Chee tells CNN.

“There’s a mix of anonymity and rootlessness to being on a train that makes you feel you could be anyone, anywhere — which turns out to be excellent ground for writing fiction.”

Chee’s residency is scheduled for May, and will take place on a train from New York to Portland, Oregon, changing trains in Chicago.

“One thing I’ve been moved by are the many stories I’ve since heard of, train trips that people have taken in order to just write, or even to think,” says Chee.

He says a friend wrote to say Gerard Mortier at the Paris Opera would take long-distance trains for the luxury of long, uninterrupted discussions on important matters.

“I think what happened was borne out of that, even as it’s also reminded people this is a really easy, even very traditional way for them to just go off and write,” Chee says.

“It’s been an overwhelming reception, I don’t think we could ever have anticipated how quickly so many people would respond to the idea of the program, and how liberally they’re endorsing it,” says Julia Quinn, Amtrak’s director of social media.

But for Amtrak, what’s the upside of having writers clamoring for free rides?

Quinn says the reaction within the company “is only positive” and that news of the program has re-kindled nostalgia for train travel among people who might not have previously considered a trip by train.

“Now we have people saying that they are doing or want to do their own versions of the Amtrak residency,” she says. 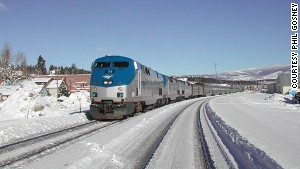 ‘pon the snowy tracks of possibility did the writer freeze.

Up to 24 writers will be chosen for residencies, which will only take place on undersold long-distance routes.

Each residency will include accommodation on a sleeper car with all a writer really needs: a bed, a desk and outlets.

Applications will be judged on a year-round basis by a panel of Amtrak executives and outside writers.

Because travelers tend to book longer routes earlier, it’s easier for Amtrak to predict which routes will have the vacancies they can grant to resident writers, says Quinn.

Residents won’t be obliged to write about or mention Amtrak in their work, nor will they be expected to turn in any writing to the company after their trips.

Quinn says Amtrak has concluded that the organic social-media buzz created by the residency program provides enough of a return on investment.

All residencies will take place over two-to-five days on 15 long-distance routes, and will be free.

As Amtrak was formalizing its residency application process, Quinn shared a few of the company’s picks for best routes for writers to get cracking on the next great American novel.

“Someone writing about food could do the long-distance trip from Chicago to Memphis, via New Orleans, doing a huge foodie tour with a lot of little stops, for example,” says Quinn.

Here are three more writing-trips suggested by Amtrak and fleshed out by wistful editors stuck in offices.

From the train writers can ponder the Mississippi River and imagine sharing the same writing space as Midwest bard Garrison Keillor as they chug past the glowing night skyline of Minneapolis and St. Paul.

The next morning, the stark North Dakota plains and Big Sky country in Montana provide an atmosphere suited to contemplative procrastination.

From Spokane, Washington, writers can pick their bohemian finale by continuing to Seattle or head down the Columbia River Gorge to Portland, Oregon.

In either end point, they’ll be in their element, surrounded by freelance writers highly motivated for freebies.

The California Zephyr plies one of the most beautiful train routes in North America.

Crossing through the plains of Nebraska to Denver gives writers ample time to begin thinking about what a rough outline might eventually look like.

Baby steps … then happy hour! (Is Amtrak aware this is how writers work?)

Climbing through the heart of the Rockies, and then the snow-capped Sierra Nevadas, may ennoble the stout of word, but the outstanding views might distract less self-disciplined writers.

The rhythm of the rails is intoxicating, indeed, but beware, loquacious scribblers, for it also induces a state of somnambulant torpor from which even the combined forces of Webster, Roget, Strunk and White may not rescue you.

What scenery could be better to gaze at out a window while pondering future royalties and which outfit to wear for your first interview with Colbert?