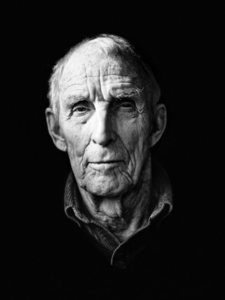 On April 5, 2014, we learned that the American writer Peter Matthiessen, 86, had died in a hospital near his home in Sagaponack, New York.  He had been suffering from acute myeloid leukemia; his death came as he awaited publication of his tenth novel, In Paradise, on April 8.

For more than a half century Matthiessen was a benign, unusual figure in America’s literary life. A man of huge talents and incredible stamina, he stood out in any kind of crowd—of fellow fishermen, or birders, or Buddhist practitioners, or zoologists, or novelists—with his gravelly, husky voice, his kindly mien and bounteous wit, his grand smile, his glinting, watchful eyes.  He made exacting judgments, but his spirit was generous and liberal, and these qualities marked everything he turned to, whether as naturalist, as voice for sane, progressive politics, as spiritual practitioner and teacher, as artist or as friend.

“The Buddha says that all suffering comes from clinging,” Matthiessen said shortly before he died. “I don’t want to cling. I’ve had a good life, you know. Lots of adventures. It’s had some dark parts, too, but mainly I’ve had a pretty good run of it, and I don’t want to cling too hard. I have no complaints.”

That pretty good run began when Matthiessen was just out of college in 1950:  he wrote his first two novels and joined his friends George Plimpton and Thomas Guinzburg in founding the Paris Review well before his thirtieth birthday.  (He permitted his [somewhat desultory] work for the CIA in Paris to be mentioned publicly only toward the end of his life; the agency had approached him when he graduated from Yale, where it often scooped up recruits.) The next decade saw two more novels: Raditzer (1961), featuring the dramatic encounter between two U.S. Navy men—one blessed with good fortune and the other a miserable cad; and At Play in the Fields of the Lord (1965), concerning (among many subjects) native tribes in the Brazilian jungle, missionaries who want to change them, and armed mercenaries on their own mission.  Already these signaled Matthiessen’s deepest concern to understand the root of good and evil in human nature.

Early on, he set a pattern of research and travel alternating with reclusive literary work at home. To start with, he explored the American countryside in prodigious detail, often but not always on journalistic assignment; his keen observations enrich and enliven his first nonfiction work, Wildlife in America (1959).  Years before Rachel Carson’s Silent Spring and the birth of an environmental movement, years before the federal government bothered to have an Environmental Protection Agency, this energetic fact-filled book recounted the bleak history of how, when, and where mankind had caused the extinctions of creatures great and small, acquainting us with the birds and beasts we had lost forever and the ones whose future was imperiled by our continued imprudence. When Matthiessen updated Wildlife in America in 1986, his prophetic warnings were only the stronger: we were bringing about a cascade of extinctions unlike any in human history, he warned, with our reckless indifference to “the shimmering web of life that is starting to unravel all around us.”

Matthiessen’s international travels hardly fit the conventional field-trip category; they were so much more than that. One excursion—which took him up the Amazon River and into the mountains of Peru, then up and down the Andean spine of South America, ten thousand miles in all—gave him material both for At Play in the Fields of the Lord and for the dazzling book he entitled The Cloud Forest: A Chronicle of the South American Wilderness (1961). When he was asked to join an expedition in the Baliem Valley of central New Guinea, he got there by going eastward across Africa and Asia, garnering material for Under the Mountain Wall: A Chronicle of Two Seasons in Stone Age New Guinea (1962) and for his later work The Tree Where Man was Born (1972), which ranged from paleolithic to modern African issues of human development and land management. Like his novels, these other books showed Matthiessen’s keen interest in the fundamental nature of humankind, and, equally, his commitment to recording the consequences of human intervention in the natural world.  It is no wonder he disliked being called a travel writer: so much more was going on.

The expansive lyricism and meticulous precision of Mathiessen’s prose are on full display in his part of a remarkable collaborative enterprise directed by Gardner Stout (then a senior figure at the Audubon Society, American Museum of Natural History, and Peabody Museum at Yale), which led to a memorable book: The Shorebirds of North America (1967). This large-format volume—lavishly illustrated with full-color paintings of all the waders, lavishly annotated by bird authorities—featured at its heart an elegant essay by Matthiessen celebrating these familiar yet strange beach visitors.  Then within a few years he completed Sal Si Puedes: Cesar Chavez and the New American Revolution (1969), a political essay about the leader of striking farm laborers in California; and Blue Meridian: The Search for the Great White Shark (1971), which reported on Peter Gimbel’s expedition to study this huge predator; this is when Matthiessen could witness whale-hunting at first hand, that controversial, primal enterprise which has attracted writers for centuries.

Matthiessen said that he wrote his novels in an experimental mode and that each seemed to take almost twice as long to finish as the previous one.  The spare, poetic Far Tortuga (1975), perhaps the most daring of his fictions and likely his favorite, took eight years, he said—like Blue Meridian it concerned fishermen and the sea, but set to music in a very different key and tempo.  Those same years were also filled with assignments that supported his other major book of the time: The Snow Leopard (1978). This haunting work chronicled the trip Matthiessen took in 1973 with the German field biologist George Schaller, who wanted to study the Himalayan blue sheep, a little-known animal living on the high Tibetan plateau; he and Matthiessen also hoped they might see, as few people had, the sheep’s principal predator, the legendary snow leopard.  For Matthiessen, the trip was also a pilgrimage to the celebrated Buddhist monastery of the Crystal Mountain, where the Tibetan lama of Shey lived and meditated in seclusion.  But the book was something else again, for in it Matthiessen wove into the already many-layered drama of the trip his daily struggles to come to terms with himself, with the memory of his late wife, who had introduced him to Buddhism and who had died of cancer the year before, and with the ancient meaning of the Buddhist doctrines he pondered on his pilgrimage.  (These themes recurred in Nine-headed Dragon River: Zen Journals 1969–1982 (1989).

Two major undertakings preoccupied Matthiessen in the last decades of his long writing life. One was his engagement with native Americans.  He wrote essays on many native tribes, some of them collected in Indian Country (1984), but In the Spirit of Crazy Horse  (1983) was the masterpiece—a comprehensive account of the confrontations between the federal government and Lakota Indians near Wounded Knee, South Dakota, culminating in a shoot-out in June 1973 that left one Indian and two FBI agents dead; a Lakota man, Leonard Peltier, was convicted of murder, but Matthiessen and many others believed he was innocent.  Within days of the book’s publication, Matthiessen and his publisher were sued for libel by a former South Dakota governor and another FBI agent who had been on the scene in 1973. Eight years of unpleasant litigation, during which the book could not be further distributed or reprinted, bore out the truth that In the Spirit of Crazy Horse had been free of libel all along; a new edition appeared in 1991.

Matthiessen characteristically continued in high gear on other fronts. In the last decade of the twentieth century and into the twenty-first, he was still giving us news—often terrible news—about treasured, now all but doomed domains (Antarctica; the shores of Lake Baikal, Siberia’s sacred sea; the forbidden kingdom of Lo Monthang, in Nepal), and the straitened circumstances of some of the world’s most beautiful, rare creatures (tigers, cranes).

But the paramount second undertaking was a symphonic, multi-volume novel about a mysterious plantation owner who was killed in the remote Ten Thousand Islands region of southwest Florida in 1910. Drawn to the conflicting legends about this alleged murderer and outlaw, Matthiessen explored and reinvented them first in three separate novels, Killing Mister Watson (1990), Lost Man’s River (1997), and Bone by Bone (1999), then, in 2008, in a single work, the prize-winning novel Shadow Country. “In every way,” one critic wrote, “Shadow Country is a bravura performance, at once history, fiction, and myth—as well as the capstone to the career of one of the most admired and admirable writers of our time.”

May he rest in peace.