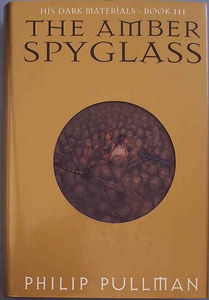 There is a scene in Phillip Pullman’s The Amber Spyglass in which Lyra Silvertongue, a young white girl on the margins of adulthood, must make an awful choice. She has journeyed to the land of the dead to make amends with Roger, a childhood friend whose death she feels responsible for. In addition to the land of the dead being a generally awful place—gray, dank, full of puddles and lethargy and spectral reminders of human mortality—Lyra experiences a series of wrenching losses in order to get there. But when Lyra steps into the ferryman’s boat, he tells her there is one more thing she must do: leave behind on the bitterly gray-puddled shore the part of herself she loves the most.

To any reader who has followed Lyra this far, the devastation of this ultimatum is clear. Lyra is presented with the choice to act on behalf of another child, but in order to do so she must deny herself what feels most self-evident about her identity. Most heartbreaking is the knowledge that she could choose otherwise—but she cannot, not really, and she does not, and Lyra weeps violently with intense fear and guilt and the pain of self-awareness when she leaves this part of herself behind.

In a dissonantly logical way, Pullman’s status as a banned writer registers as one more self-evident privilege.

In a 2009 The Guardian article on banned books, Phillip Pullman is described as “having notched up a new distinction: he is ranked second in the top 10” banned books in America. Pullman’s response was to say that he was “very glad to be back in the top 10 banned books.” In light of ongoing conversations about how privilege—especially white male privilege—reenacts the same inequity of opportunities for marginalized writers in the publishing industry that it does for marginalized people in society at large, it is worth sitting with Pullman’s response for a minute. It makes sense that a writer who feels confident that their voice will be uplifted to great success despite the act of book banning would also feel that being one of the most-banned authors in America is not an oppression but a validation. In a dissonantly logical way, Pullman’s status as a banned writer registers as one more self-evident privilege: “As for Pullman, he confidently expects to be back in the top ten next year.”

I weep with Lyra every time I read the aforementioned scene. This is not the first nor the last scene in The Amber Spyglass that renders me so undone. Pullman’s His Dark Materials trilogy has been meaningful to me for how it promotes the courage and creativity of children in the face of an unjust world. In addition, the books take seriously the idea that an individual volunteering to forgo their wants for society’s needs can effect difficult but joyful change in the world. His Dark Materials holds a serious place in my heart.

Ironically, landing on a Top Ten Banned Books list implies having achieved a degree of visibility so many hard-working marginalized writers can only dream of.

It has therefore been a major source of conflict to reconcile my love for Lyra Silvertongue’s world with the fact that Lyra’s world is not one in which all people exist as whole people. Two races of people created by Pullman, the Samoyeds and Tartars, are identified by “broad Asiatic faces,” “black eyes,” and the fact that every Samoyed and Tartar has a wolf for a daemon: a direct statement of subhumanity, considering one of the most-beloved aspects of the books is the diversity of daemons attributed to most other characters to signify their individuality. Even worse, the people in Lyra’s world who are described as most likely to have no daemon at all—to have no daemon is to literally have no soul—are either Tartar or African. Because race in His Dark Materials is a matter of not being white, whiteness is not racialized but normalized with character descriptions like “Lyra saw his features: he was not a Samoyed or a Tartar. He could have been a Jordan scholar.”

It is my belief that Pullman wrote His Dark Materials in honor of children, but I do not think he wrote these books for children who look very different from Lyra.

As a child, I experienced the need for narratives that uplifted, challenged, and galvanized me, narratives that saw me in all my glorious and complicated humanity. However, the options available to me were majorly white and colonized. In most of the heroic stories I read, people who were not white were (if they appeared at all) utilized as functions of a white hero or heroine’s journey. As a kid of color, I felt faced with an awful ultimatum: acclimate to the pain of encountering racism in storytelling, or deny my hunger for stories altogether and stop reading. The latter was unthinkable, so I learned to make do with what narratives were available to me, and in doing so learned acceptance of storytellers who did not accept me.

The banning of marginalized narratives is largely invisible because it is a preemptive banning, occurring at the gates of industry and not beyond them.

Children who learn such acceptance, I believe, are being asked to tear a part of themselves out and leave it behind to shiver on that bitterly gray-puddled shore. If we survive, we survive, and enter adulthood, and perhaps discover that it need not have been an ultimatum in the first place. The dissonance of being a kid of color in the face of an unjust publishing industry could become a site of renewal. That is, I choose to believe it is so.

While Pullman’s trilogy was one of the top officially banned stories of this decade, the actual distinction of “most-often banned” is held by innumerable writers of color, of non-normative ability or gender or sexuality or citizenship, of the working class, of the margins, who have been told over and over that there is no value in our stories and they do not fit gatekeepers’ standards for success. This distinction has been held for centuries, not a decade, and has never been the cause for celebration that it is for a writer like Pullman. I do not say this to belittle the dire consequences of book-banning. Ironically, landing on a Top 10 Banned Books list implies having achieved a degree of visibility so many hard-working marginalized writers can only dream of. The banning of marginalized narratives is largely invisible because it is a preemptive banning, occurring at the gates of industry and not beyond them.

I imagine a world in which a story-telling industry comprised of 80% people of color is not only possible, but mundane.

What if the preemptive banning of marginalized writers is just as much a cause of trauma as racist story-telling by powerful white writers?

This idea presents me with a choice.

Here, I must leave Lyra’s world behind me, a separation filled with feelings of fear, guilt, and the pain of self-awareness. I must no longer expect the white heroes of narrative to provide the child in me with the respect she needs. Instead, I imagine a world in which we dedicate courageous and creative energy to the uplifting of marginalized storytellers so that we need not anticipate the preemptive banning of our art, the inherent unsalability of it. I imagine a world in which a story-telling industry comprised of 80% people of color is not only possible, but mundane. I imagine a world in which kids of color feel they have a choice as to whether to accept storytelling that erases them. I am, oddly, imagining a world in which marginalized writers might react to the banning of their art as if it were a privilege and not another iteration of erasure. I do not imagine a single season of equity, but an epoch driven by it. Any engine thus powered would be turbulent, yes, but full of honest life, and possessing and giving freely of its own brightness so that others might claim their right to be seen, to be heard, and to exist.

Lo Kwa Mei-en is the author of Yearling (Alice James Books 2015), winner of the Kundiman Prize, and The Romances, a chapbook forthcoming from The Lettered Streets Press. Recent work can be found in New Orleans Review‘s science fiction issue, Poetry Northwest, The Margins, The Offing, and VIDA: Women in Literary Arts. She is from Singapore and Cincinnati, Ohio, where she currently lives and works. You can find her online at www.lokwameien.com.