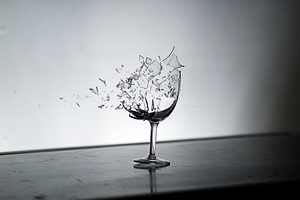 The following flash piece appeared in Passages: Africa, the first issue of PEN America’s translation journal, Glossolalia. Glossolalia advocates for writers with limited access to the global reading community. By publishing works from lesser-translated languages, Glossolalia connects storytellers to audiences eager for a vivid, mind-expanding look at experiences unlike their own.

“Petty Blood Sport” also appeared in the Guernica/PEN Flash series. Subscribe to the series and get new flash delivered to your inbox twice a month—no spam or news, just stories.

He injured me is how we met. He kicked me in the shin in the line for free wine.

My little world {Is this oaked?

There are so many people here} jolted.

Suddenly my hands were empty and everything was cracked. Though it wasn’t my fault, I said sorry. He was sorrier. My silk shirt was stained and blotchy and red like my cheeks when he bought me another glass.

We murmured late into the spring night about what made us both wrong. There was a lot. I write too many lists. I can only cry out of one eye. The left one is too sentimental and the right one too cold. We both understood trouble and what it was like to have half of you propelling forward and the other half yanking you meanly back. A constant gripping of the back of your neck. Or even worse, the imagining. The anticipation of it. The fear-in-waiting.

He kicked me again while we were goodbye-ing.

“Neither can I,” I said, leaning in for a kiss, using his ear as a handle.

He said it was to be goodbye. I didn’t know what that meant. For our petty blood sport to be over. No more bruises to pepper my pallid body. And no kisses to soothe them after. No one to tell me to quit smoking these joyless fags. Or to quash them when I fall asleep. I woke up one day and his side of the bed had burned. The sheets and pillow and most of the mattress. All from a lazy hand and a stealthily glowing butt. Fire had eaten it away. A friend of mine told me it was a sign to move on. Lucky I wasn’t fucking dead, is what she said.

But I don’t choose to keep Sam burning on. I love him like a reflex. Another in my list of bad habits. The only animate one. So animate people thought he was beating me, when he wasn’t. I reach for him in my mind when I’m alone. In the gaps between things, meetings, and people, he waits. Beckoning, then dissipating. Leaving me full yet wretchedly empty. My memory is full but I am empty.

Filled with the scent of wild sage.

Wild sage crisping up is what Botswana felt like. When we drove through it, all dust and acacias and a heavy dry heat sifting into your throat filling you up until you thought you’d combust. We were road-tripping along and he wondered what smelled of sausage and mash? This black Englishman who should have known his colonies better. The sage surprised him. We stopped to pull up a bush. It wasn’t too committed to its home. It shook loose easily. A stride or two and a few clods of dirt and we put it on the back seat.

“Should we water it before we go onto the pan?” I asked. Parked at the edge of a cracked mirror, the dried-up salt pans, I felt like we were on the final frontier. Together in the same space. Sam was so dark it was always a surprise to see his palms or soles. A flash of white lightning. As shocking as this other world. Coruscating, blinding, and alien. We walked along it. Too dazzled to take photos. Just looking. Seeing. Absorbing. And letting our retinas be seared with the memory of salt.

When we got home we spent a lot of time at train stations. He saw me off to work. I hated sitting in traffic, and he could barely commit to the same vehicle for the whole holiday, let alone settle on a car to buy. The train was always too late or too early, like all the big events in life. Never on time and never fully wanted. It just zoomed up upon you. Too loud to ignore. It creaked like an old man during the rains. Then hordes of people bustled on and off. Frowning and sighing while being swallowed by this city beast. Whooshing through its entrails then being spat up somewhere else. It was a busy summer, wet and sunny. Humid, the days groped and fondled. They left their sweaty handshake on you.

Essentially, expensively, he couldn’t sit still. Or work. He was the bull. The world an exclusive china shop. It was a condition. There were medications I would remind him to take. There were appointments he would choose to forget. It was worse when he was stressed, then he would buck and quake for minutes at a time. My graceful lover gone. His arms and legs the devil’s playthings.

By autumn we were just alone together. There was never a right time to talk. He just sat, collar ripped and dangling, around his collarbone. He waited for the next forced puppet show and sat by all the things he’d accidentally punctured or broken, vibrating from the recent violence. I hesitated to clean them up. Not knowing when to move in. We were out of tape again. I felt like we were always running out of tape. And out of breath. I had to stop smoking so much.

We were waiting on the platform. My left eye (disobedient thing) cried as he broke up with me. I tapped my feet and wiped roughly at it to try and get it to stop. The left shoulder of my jacket was beginning to get moist. I hated the smell of wet felt. Time was frozen. It bit at my nose. I watched him lean into death. His last movement, one he meant.

He said it was to be goodbye.

Efemia Chela was born in Zambia in 1991, but grew up in England, Ghana, Botswana, and South Africa. She studied at Rhodes University, South Africa, and at Institut D’Etudes Politiques in Aix-en-Provence, France. When she grows up she would like to be a better writer and graphic novelist. She enjoys eating pizza, playing croquet, and watching black and white films. Her first published story, “Chicken,” was nominated for the 2014 Caine Prize For African Writing.