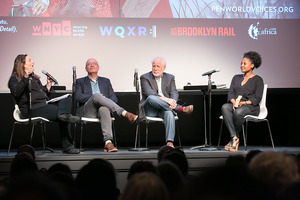 There is a difference between an autobiography and a memoir, poet and novelist Michael Ondaatje noted as the “Memoir and Memory” panel opened on Thursday night in the Sheen Center. Each participant—Ondaatje, Luc Sante, and Tracy K. Smith—were asked to read a selection from a memoir that influenced their own. Ondaatje read from Frank Conroy’s Stop-Time: “It takes place when Conroy was twenty-five, when nothing has happened to this man, but then again, everything has.” Memoir, as discussed by each writer, is a freeing, less-constricted form than autobiography, which relies on a strict chronology to communicate its narrative. Realizing this difference was critical for Ondaatje in writing Running in the Family, which delves into his family’s history and experience in Sri Lanka. His inspiration came when he returned to Sri Lanka at thirty, after having lost the “landscape of his childhood.” There, the people he met told him the most “fantastic stories that turned out to be lies.” His memoir lies here, somewhere between nonfiction, lies, and truth.

Poet Tracy K. Smith noted how it was important for her to write poetry first before tackling her memoir Ordinary Light. When she first began to think about writing a memoir twenty years ago, she said, “I thought writing was saying what you knew. But through writing poetry, I learned it was about asking questions and seeing if your language and the metaphors used can teach you.” She had opened the panel with her reading of an excerpt from Richard Wright’s Black Boy, adding that Wright’s use of “adult language to express a child’s perspective” proved most influential for her when it came to writing around the sometimes purposeful “silences” of her life, such as race. Her pregnancy provided a sense of urgency for writing about her mother’s death: “I wanted to tell myself that story and find a way of affirming that that life had been real.” Instead of writing a straight, non-fictional account, using the form of the memoir allowed her to explore the subjective truth of her memory and “the stories we take as fact.” “Subjectivity invites us to understand the story and teaches us how to live,” she added, echoing Joan Didion’s famous first sentence in her essay “The White Album.”

Memory, and its shortcomings, played an important role in Luc Sante’s The Factory of Facts; his inspiration was similar to Ondaatje’s, spurred by a return to his home country of Belgium at thirty. “When I arrived, I had a massive Proustian orgasm all over the place,” he noted. Everything was familiar, though he described the experience of finding his way around the country as “being led by spirits.” When he set out to write his memoir, he had to reconcile the lack of his family’s record beyond his parents: “I had to regard everything from my parents as flawed and fallible. Everything beyond them was speculation.” In his memoir, he tried to conceal himself in “the shrubbery,” focusing more on the forces that formed him. His approach was inspired by Vladmir Nabokov’s Speak, Memory, which didn’t focus so much on Nabokov’s development but the environment that made him who he was.

But the memoir isn’t written in a vacuum. The lives of relatives are often included, and there is a question of how to approach their depiction. This is where Ondaatje’s distinction between the memoir and autobiography is key: the memoir allows for an unreliable narrator, who can paint a relative’s cirrhosis of the liver as simply liver disease. Or, the position of the unreliable memoirist can allow for varying interpretations of events, as Smith realized when she spoke with her siblings about her mother’s illness: each had been entrusted with varying levels of information and fact, but together, even if contradictory, each account painted a truthful portrait. The memoir is also an act of forgiveness. While Sante wished his parents could have forgiven him for writing The Factory of Facts, he ended up forgiving them by writing the book.

There is, of course, the matter of readers and what each will take away from the text. Author A.M. Homes, who moderated the panel, described it best: “People find their history in your history.” This is perhaps what makes the memoir so important and ultimately more relatable than autobiographies, which as Sante noted, often languish unread: it is possible for the reader to find themselves in the exploration of truth and memory, in the author’s act of putting remembrance to the page, instead of a faithful documentation of their life as lived.