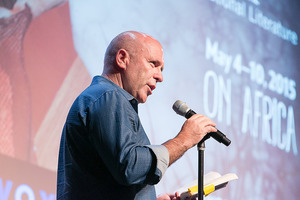 “I won’t read long,” Australian novelist Richard Flanagan promised the audience. “Otherwise, like Dostoyevsky said, ‘It’s no longer literature, but corrective punishment.’” This audience member would beg to differ in the case of Flanagan’s masterful and absorbing reading of his Man Booker Prize-winning novel The Narrow Road to the Deep North. He read two portions from the last third of the novel, each dealing with the lingering impacts of trauma in the wake of the Japanese prisoner-of-war camps during World War II. Traumas, Flanagan explained, “are communal, and they’re not fixed in time. The traumas pass into families and societies.”

Flanagan’s words come from his own experience: his father was interned at a prisoner-of-war camp and built railroads under the supervision of Japanese guards. “Man survives by his ability to forget,” he continued, “but at a certain point, it must be confronted in order to live. That sometimes falls to others to confront the darkness.”

Confronting his father’s darkness, in the form of writing The Narrow Road to the Deep North, took Flanagan twelve years. At times, he didn’t want to write the novel because it frightened him. “I felt the novel as a stone within me. It became like a catch in the throat.” But it was perhaps “illogical reasoning” that pushed him to put his pen to paper: if he didn’t write this novel, he’d never write again, and he had to write it while his father was still alive.

The process included drafts in longhand and manuscripts that eventually found their way into fires. “Old manuscripts are gangrenous. You have to have the courage to create anew,” Flanagan noted. Along the way he also realized that, at its heart, the novel needed to be a love story: only focusing on the darkness would not be true to the human experience, because hope plays a huge role in our lives.

It was, perhaps, this hope that led Flanagan to travel to Japan and visit three of the guards who encountered and, in some cases, tortured his father. While all three asked Flanagan to tell his father that they regretted what they did, each encounter was different. The former medical orderly recalled seeing “skeletons crawling in the mud.” When Flanagan asked him if he thought to help these prisoners, the orderly told him that he understood the prisoners to be “less than human.” The second guard, nicknamed “The Lizard” by the Australian prisoners, did not seem to remember the violence of the camps; but he did remember how to slap. Flanagan asked the elderly guard to slap him as he had slapped the prisoners in punishment. “He arched his body like an athlete,” Flanagan recalled. “He understood the human labor that goes into violence.” After the third slap, the room began to spin due to a sudden earthquake. Flanagan turned to the guard: now he was just a frightened old man. The third guard lived in a remote village, and the mayor apologized to Flanagan in the middle of the town. While photographers took pictures, Flanagan stood next to the guard with their arms around each other. When the photo-taking ended, Flanagan dropped his arm, only to realize the guard still had his arm around him, as if trying to make a connection.

Flanagan returned home, and told his father of his experiences. Later, his father could no longer remember what happened to him in the camps; he could remember his life before and after but only had a faint recollection of his time there. Flanagan’s sister told him she believed their father was finally free. The darkness had been confronted.