PEN World Voices Festival: Edwidge Danticat on how “a story is never really yours” 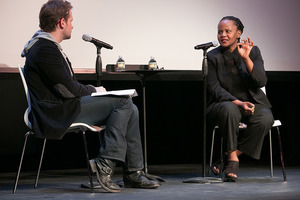 What is author Edwidge Danticat thankful for? Fellow author John Freeman’s introduction for starters: “I’m sitting next to one of the best writers in the world,” he said. “She is the second-coming of Zora Neale Hurston.” Judging by the appreciative sighs and applause, Freeman certainly wasn’t alone in his opinion.

“I am glad we’re sitting here though, otherwise that could have sounded like a eulogy,” Danticat quipped. While she noted it with a smile, eulogies probably aren’t too far from her mind. The previous night, Danticat had read her “Prayer Before Dying” for the World Voices Festival’s “Prayer and Meditation” event. Her moving piece paid tribute to her mother by imagining her last prayer. “I feel like I’m a cliché in grief,” she told Freeman. “I’m grateful for life.”

While Danticat noted that her first book Breath, Eyes, Memory was written for her 15-year-old self (“Even though my mother would have forbidden me from reading it!”), nowadays she is focusing more on writing for others: her children, nieces and nephews. She has two books due for publication this fall, one for young adults, and the other for children. “My nephew recently asked me, ‘Can I read your writing now?’ and I told him to ask his mother. My latest work is still sad, but he can read it right away.”

It was, in fact, a children’s book that helped Danticat find her calling as a writer. While she loved listening to the storytellers in her community in Haiti, reading Madeline opened the possibility of telling a story “silently and more intimately.” Yet, the communal aspect of oral storytelling remains present in her work, most prominently in The Dew Breaker and Claire of the Sea Light, both of which defy the categories of novel or short story collection. Both reflect Danticat’s belief that a story is never really yours; it is “community property.” “There is the text version,” she explained, “but then there is your mom’s version versus your aunt’s version.” Especially in the case of The Dew Breaker, a collection of voices was necessary to tell the story in order to reflect the multiplicity of individual experiences. Danticat related that after reading portions of the book in public, a man with dark sunglasses approached her and said, “I read your story, and I want you to know we had no choice.” The man was a former Tonton Macoute, a member of the Haitian militia force that tortured dissidents and citizens in the 1970s.

But to focus only on the sorrowful moments of Haitian history is to do Haiti an injustice. Danticat showed two videos of Haitian art, which told another side of the story: one of resilience, strength, and celebration. “Haitians paint their dreams. Their work isn’t entirely representative of reality,” Danticat noted. Ever since she was a little girl, coming to Brooklyn to live with her parents, Danticat has found a sense of home in Haitian artwork and books. “When I came to the United States, it was a difficult time to be Haitian in Brooklyn. We were called names like ‘boat people.’ Finding the Brooklyn Museum’s collection of Haitian books was like a feast.”

For a reader to approach Danticat’s work is to be swept into such a feast. We become witnesses to the diaspora and part of a world where, as Freeman noted, “an elegy can bring back relatives.” We are visitors to Danticat’s world, and we are most grateful for that opportunity.