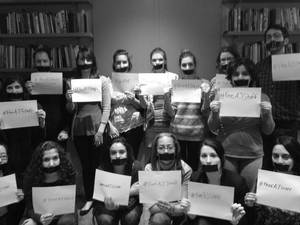 On December 29, 2013, Al Jazeera journalists Peter Greste, an Australian national, Mohammed Fahmy, a Canadian-Egyptian, and Baher Mohamed, an Egyptian national, were arrested in Cairo after being accused of illegally broadcasting from a hotel suite. The three are among 17 journalists facing charges of having links to a “terrorist organization” and “spreading false news.” Most of the defendants are being tried in absentia. Greste, Fahmy, and Mohamed remain detained in Cairo’s notorious Tora Prison, and faced their first hearing on February 20, where they appeared in a cage.

PEN staff has joined a journalist-led “selfie” Twitter campaign calling on Egypt to free these three men, declaring that journalism is not a crime. We encourage all PEN members and supporters to join us. Simply take a photo of yourself, gagged by tape or cloth, holding a piece of paper with the hashtag #FreeAJStaff. Post it to Twitter and encourage your followers to join.

Al Jazeera has also launched a Thunderclap action, whereby a universal message of support will be blasted on social media platforms simultaneously on February 27, amplifying awareness of the journalists’ plight and pressuring the Egyptian authorities to let them go. Join the campaign here.

The arrests come during an escalating crackdown on dissent in Egypt, where journalists, writers, civil rights activists, and independent or critical voices are targeted by security services for their reporting or peaceful activism. A new constitution, which came into effect after a national referendum on January 18, 2014, provides improved provisions for freedom of expression and bolsters press freedom, but the situation on the ground has seen widespread violence. Peaceful protests are violently suppressed by police and thousands arrested for their alleged support of the Muslim Brotherhood, which was banned in September 2013 and declared a terrorist group on December 25, 2013, the day after a new anti-terror law was passed. Hundreds have also been arrested under a repressive protest law that was issued by interim president Adly Mansour on November 24, 2013.

Join writers and journalists around the world to remind Egyptian authorities that we are watching them, and that they have obligations under international law to protect freedom of expression. Tell them to #FreeAJStaff now.

Al Jazeera English correspondent Peter Greste, an Australian national, Mohammed Fahmy, a Canadian-Egyptian, and Egyptian national Baher Mohamed were arrested on December 29, 2013, after being accused of illegally broadcasting from a hotel suite. – See more at: https://pen.org/blog/freedom-expression-under-threat-egypt-journalists-languish-prison#sthash.RTv9kBS6.dpuf