PEN Speaks Out Against Prosecution of Journalist Barrett Brown 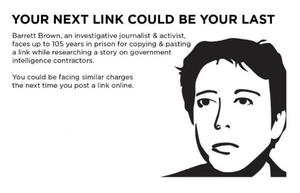 PEN American Center hailed the motion of a prosecutor in a case against journalist Barrett Brown to request the dismissal of 11 criminal charges. Brown, a widely published freelance journalist who is perhaps best known for his coverage of the hacking group Anonymous, faced charges related to his pasting of a link into a chat room that pointed to hacked files from the security contractor Stratfor Global Intelligence.

“Sharing links has become an essential part of the currency for newsgathering and information flow in the digital age,” said PEN American Center executive director Suzanne Nossel. “Journalists, officials and ordinary citizens pass along links all day every day—no one can be held responsible for the content of all links they share. The charges against Barrett Brown related to linking threatened to chill journalism in the public interest and undermine the free flow of information in the digital age. We are encouraged by the decision of the government to drop these particular charges in the case.”

PEN was slated to join the Electronic Frontier Foundation (EFF) and other free expression organizations in the filing of an amicus brief in the case, but the brief became moot once the prosecutor moved to drop the relevant charges.  Brown gained media attention when he was designated the “unofficial” spokesperson for the hacker collective Anonymous, a group he was researching for a book. He is the founder of a distributed think-tank called Project PM which researches and reports on matters related to the intelligence contracting industry and he was the co-author of the book Flock of Dodos: Behind Modern Creationism, Intelligent Design and the Easter Bunny.

Brown was arrested in September 2012 and is currently in prison awaiting trial in three separate criminal cases. PEN has only spoken out on the case involving the leaked files related to Stratfor Global Intelligence. These files allegedly contained discussions within Stratfor about assassination, rendition, and how to undermine journalists and foreign governments. Brown was attempting to “crowdsource” the analysis of the Stratfor hack by enlisting the help of volunteers to sift through the voluminous documents, a practice which has become more commonplace in reporting on leaked information. He sought to crowdsource by copying and pasting a link which was already available on the internet into a chat room. However, the files from the hack also contained stolen credit card information. Ignoring the public interest implications of the release of the Stratfor hacks, which might have exposed illegality on a massive scale, the government instead charged Brown for identity fraud despite a lack of evidence that he participated in the hack itself or that he intended for others to utilize the credit card information.

Charging Brown for the act of linking is extremely troubling for free expression. Today, journalists and readers routinely share information through the use of hyperlinks—a cornerstone of surfing the internet. Criminalizing the use of these links would chill speech on the internet. The remaining charge on the case, which the prosecutor has not dropped, relates to the possession of stolen credit card information and not the act of linking. The amicus brief will be made available on the EFF website early next week.