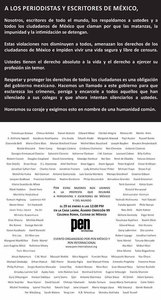 Representatives of PEN centers from around the globe joined PEN International President John Ralston Saul and Mexican writers and journalists in Mexico City for a unique show of solidarity against the violence and impunity stifling free expression in the country.

Sixty writers each read two hundred-word statements prepared specially for the PEN Protesta! event. Among those reading were Russell Banks, Laura Esquivel, Elena Poniatowska, Javier Sicilia, Gilian Slovo and Hori Takeaki. The event was part of a four-day PEN International delegation to Mexico City, which included the publication of a letter to Mexican authorities signed by 170 writers; high-level lobbying efforts; a meeting with Mexican Freedom of Expression NGOs; an online petition; and a press conference.

Below are statements read by PEN American Center delegates Russell Banks and Larry Siems, Director of Freedom to Write and International Programs.

Like the rest of my international companions, I stand here today horrified by the sacrifice of so many of your colleagues, and humbled by your courage.

I do not forget my own country’s part in your country’s suffering—our ravenous appetite for narcotics, our pathological enthusiasm for guns—and like almost everyone on both sides of the border, I count acquaintances and close friends among the damage they have done.

With so many lives compromised and cut short, we have cut thousands of years off of our collective future.

But there will still be a future, and it will be a better one, and it will come thanks to the work you have done. By recognizing that when a bullet ends a life, it doesn’t end that life’s story; by insisting on so fundamental a thing as proclaiming that life’s name and giving names to the lives that both nurtured it and stole it; by pushing for the whole story, you are pushing us all toward that future.

May you be protected in your work. May those who have threatened and silenced your colleagues be made to pay for their crimes. And may the future you are writing for come soon.

A nation’s journalists and writers, like its poets and story-tellers, are the eyes, ears, and mouth of the people. When journalists and writers cannot freely speak of what they see and hear of the reality that surrounds them, the people themselves cannot see, hear, or speak of it either. Whoever gouges a people’s eyes, stops up its ears and cuts off its tongue makes a nation blind, deaf, and silent.

A nation blinded, made deaf and silent, cannot choose and create its own history. Simply, it becomes de-humanized property, the property of criminals and assassins. A community becomes a commodity, a thing to be bought and sold to the highest bidder. It must be remembered, therefore, that in defending our brother and sister journalists and writers against these horrendous attacks and condemning the reluctance of the Mexican government to prosecute the narco-terrorists and the uniformed collaborators who attack and intimidate them, we are defending the humanity of the Mexican people.