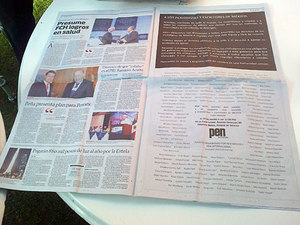 Between 2000 and 2011, criminal organizations have murdered more than 67 journalists in Mexico. In recent months, these groups have killed 15 journalists, “disappeared” three, and attacked the facilities of 19 newspapers and media outlets with firearms and explosives, according to statistics released by the organization Article 19 in October 2011. As an international literary organization dedicated to the protection of writers and the defence of freedom of expression, PEN has condemned these killings and called for an end to impunity for those who carry out attacks on media workers in Mexico. At “PEN Protesta!” delegates representing PEN’s distinguished global membership of writers lend their voices to the growing national chorus demanding effective protections for members of the Mexican press.

On January 29 at 12 p.m. at Casa Lamm in Mexico City, PEN International and the PEN Club de México will present PEN Protesta! In Support of Journalists and Freedom of Expression, a public demonstration of solidarity and a demand for accountability for the murders and disappearances of journalists in Mexico. John Ralston Saul, Russell Banks, Gillian Slovo, Takeaki Hori and six other members of a delegation representing PEN’s global membership will stand side-by-side with Elena Poniatowska, Javier Sicilia, Jennifer Clement, and dozens of Mexican writers and journalists and declare their support for a free press and freedom of expression in Mexico. The event in Mexico City represents an unprecedented show of support from the international literary community in recognition of the courage and endurance of their Mexican colleagues.