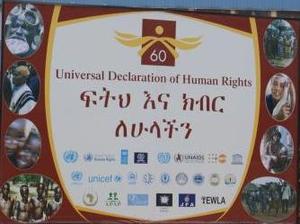 Cameroon was examined by the UN Human Rights Council in Geneva today as part of the Universal Periodic Review, the process during which each UN member country’s human rights record is reviewed every four years. PEN filed a submission on Cameroon in the Spring with Committee to Protect Journalists and Internet Sans Frontières on critical human rights issues and called for the government to repeal criminal defamation laws, protect journalists and writers, and end restrictive policies on the use and development of the internet. Honorary PEN American Center member Enoh Meyomesse remains in prison and is currently on trial on politically motivated charges. Meyomesse’s legal appeal was once again postponed until October 17 after key state witnesses failed to appear in the courtroom.

Earlier this week, PEN led a coalition of human rights groups in a submission on Ethiopia for its upcoming review by the UN Human Rights Council in 2014. In our report, we highlighted the ongoing persecution of writers and journalists, barriers for publishers and news media, and a lack of freedom of information in the country and provided a list of recommendations and solutions for improvement. We also documented the rise of digital repression techniques by the government, which currently operates one of the most extensive and sophisticated filtering and censorsing systems in sub-Saharan Africa. Journalist and PEN/Barbara Goldsmith Freedom to Write Award winner Eskinder Nega has been imprisoned in Ethiopia since 2011 on charges of supporting a banned opposition group. On July 13, 2012, Eskinder Nega was sentenced to 18 years in prison and he recently wrote an impassioned letter from jail calling for the international community to pressure the Ethiopian government. Ethiopia will be reviewed at the 19th session of the Universal Periodic Review in Geneva in July 2014. The submission was joined by Committee to Protect Journalists and Freedom Now.