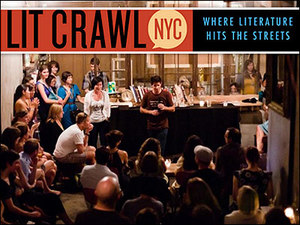 Next Saturday, September 15, PEN America will host three amazing poets for Lit Crawl NYC. Join us in the outdoor patio of Bantam, on the Lower East Side, for a night of poetry, drinks, and discussion. Poets Tina Chang, Deborah Landau, and Monica Youn will read from their new work. This is the final stop on the Lit Crawl NYC schedule so come on out and we’ll all head over to the after party at Happy Ending bar.

Tina Chang, Brooklyn Poet Laureate, is the author of the poetry collections Of Gods & Strangers (Four Way Books, 2011) and Half-Lit Houses (Four Way Books, 2004). She is also co-editor of the Norton anthology Language for a New Century: Contemporary Poetry from the Middle East, Asia, and Beyond (2008). Her poems have been published in American Poet, McSweeney’s, The New York Times, and Ploughshares.

Monica Youn is the author of Barter (Graywolf Press, 2003) and Ignatz (Four Way Books, 2010), which was a finalist for the National Book Award. Her poems have been published or are forthcoming in numerous journals and anthologies including Fence, The New Yorker, and The Paris Review. She has been a Wallace Stegner Fellow at Stanford University and a Witter Bynner Fellow of the Library of Congress and has been awarded residencies at Yaddo, MacDowell, and the Rockefeller Foundation / Bellagio.