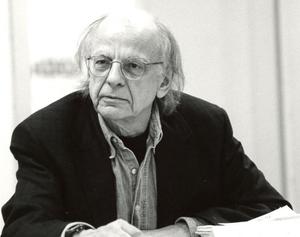 PEN is saddened by the loss of Edward de Grazia, a lawyer, professor, and playwright who devoted his life to fighting censorship and promoting free expression. Over the course of his 50 year career, Mr. De Grazia represented PEN luminaries including Arthur Miller, William S. Burroughs, and Normal Mailer, and argued cases that resulted in critical U.S. Supreme Court decisions, loosening restrictions on obscenity and establishing protections for creative and literary expression. Mr. De Grazia was also a playwright and widely-read writer who authored volumes on free speech and censorship such as Girls Lean Back Everywhere: The Law of Obscenity and the Assault on Genius (1993). As a longtime member of PEN American Center and former statesman for UNESCO and USAID, he embodied PEN’s principle that literature knows no frontiers. He will be missed.

To learn more about Edward de Grazia’s life and work, read this moving obituary at The New York Times, or this piece at Cardozo Law School, which Mr. De Grazia helped found.