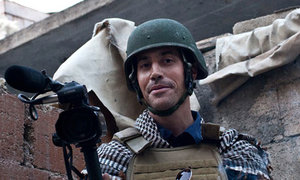 News of the politically motivated murder of journalist James Foley yesterday by ISIS militants has devastated the PEN community. The killing of Foley, cited by ISIS as retaliation for American airstrikes in Iraq, is an undeniable paradox. Through his work in war-torn Syria, Foley embodied the ideal that writers should “use what influence they have in favor of good understanding and mutual respect between nations; they pledge themselves to do their utmost to dispel race, class and national hatreds, and to champion the ideal of one humanity living in peace in one world.”

We have never been prouder of our son Jim. He gave his life trying to expose the world to the suffering of the Syrian people.

We implore the kidnappers to spare the lives of the remaining hostages. Like Jim, they are innocents. They have no control over American government policy in Iraq, Syria, or anywhere in the world.

We thank Jim for all the joy he gave us. He was an extraordinary son, brother, journalist, and person. Please respect our privacy in the days ahead as we mourn and cherish Jim.