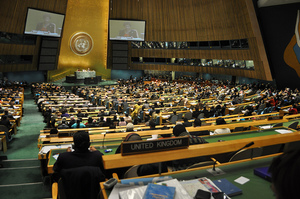 The PEN International Women Writers Committee and PEN’s International Policy and Advocacy Officer, Sarah Clarke, attended the 57th Session of the United Nations Commission on the Status of Women, which focused on ‘The Eradication and Prevention of all Forms of Violence against Women and Girls’. PEN International was one of a select number of NGOs chosen from among 6,000 delegates to comment on the issue of violence against women writers. Below is the text of PEN’s official statement.

Women Writers and Freedom of Expression

Freedom of expression as elaborated under the Universal Declaration of Human Rights and the International Covenant on Civil and Political Rights is a fundamental human right and the cornerstone of a democratic society. Women writers, through their promotion of the freedom of ideas, opinions, and information, play a crucial role in advancing plural, inclusive and equal societies. Their reporting on all human rights issues, including violence against women, is essential to the promotion of women in society and the protection of their rights. PEN International’s research, however, demonstrates that too often women writers are subject to violence from both State and non-State actors in an attempt to punish and deter them from carrying out this critical work.

Violence against women writers is a truly global concern. PEN International is currently campaigning on cases of brutality targeting women from Russia, where justice remains long overdue for the murders of journalists Anna Politkovskaya and Natalia Estemirova; to Pakistan, where the shooting of 11 year old blogger and educational activist Malala shocked the world; to Liberia, where Mae Azango, reporting on Female Genital Mutilation received threats that she would be “cut” to make her “shut up”; to Mexico, where investigative journalist Lydia Cacho was attacked and forced into hiding for her work exposing child abuse and sex-trafficking.

Sadly, these examples represent only a fraction of the shocking number of instances of such violence. PEN’s Writers in Prison Committee is actively monitoring cases where women writers have been raped, beaten, harassed, had teeth broken during questioning, and their family members, even their unborn children, have been threatened because of their work. Although the context in which this abuse is perpetrated varies hugely, it is clear that in all of these situations women writers have been directly targeted for their role in advancing freedom of expression.

Violence and intimidation against women writers are intended not only to silence them speaking out but to have a chilling effect on freedom of expression across society. Where such violence is tolerated, all of society suffers.

Existing measures to protect women writers are limited. PEN therefore calls upon member States to acknowledge the significant role of women writers in the advancement of freedom of expression. We ask that States protect women writers from violence perpetrated by State and non-State actors by recognising such violations and by offering effective security measures.

Fighting impunity is essential for the security of women writers. PEN calls for States to ensure that such violence is promptly and impartially investigated and that those responsible are punished in an appropriate manner. Women writers must be recognized as the experts in their own protection—it is essential that interagency efforts to eliminate and prevent violence specifically engage women in the design of protection programmes.

PEN is deeply interested in strengthening our existing networks in the support of women writers at risk, such as our partnership in the Implementation Strategy of the UN Plan of Action on the Safety of Journalists and the Issue of Impunity. We are eager to engage with partner organisations and intergovernmental bodies concerning the design and implementation of protective measures.

Women writers face extraordinary risks due to their work for the promotion of freedom of expression. On the occasion of International Women’s Day, PEN calls upon all parties to join with us in celebrating their vital contribution and remarkable courage.

Visit pen-international.org to find out more.

photo by UK Home Office on a Creative Commons License