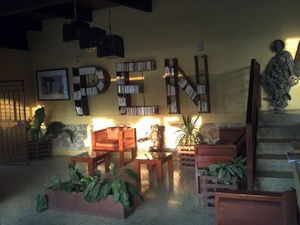 I just returned from Thomassin, Haiti, where I visited PEN Haiti’s extraordinary new Maison Georges Anglade as part of an intercultural exchange supported by the Jerome L. Greene Foundation. Named in honor of Georges Anglade, an ethnographer and academic who died in the January 2010 earthquake, the sprawling, mountainside facility is swiftly becoming a hub for youth education and international exchanges after opening in August 2012.

Over the course of the week, I joined PEN Haiti for a heated discussion on digital freedom issues, sharing PEN’s new Declaration on Digital Freedom. Technology issues are hot topics in Haiti—where even tent refugees can access their bank accounts on their cell phones. PEN Haiti recently commented on an important new digital rights bill that is coursing through parliament, and several of its members are influential online journalists. On Friday night, I debated the director of a group of activists called Café Philo about limits to free expression in the country, who argued, among many other salient points, that local communities often provoke self-censorship as much as the government. Your neighbor can be your chief censor, in other words. But the government can be too: President Martelly himself has been sharply critical and hostile towards journalists, making free expression that much more important.

The goal is to make the Maison Georges Anglade not just a functioning PEN Center, but a sustainable venture that invites writers from around the world to stay as residents, supplementing its youth programs. The neighborhood of Thomassin is a one hour drive from the airport in Port-au-Prince and is a cool refuge from the heat of the large city. The house has three large bedrooms, two bathrooms, two terraces, and gardens sprinkled with bromeliads and native orchids. Fifteen minutes down a sloping, limestone hill, you’ll find the terraced plots of peyizan farmers. It’s not exactly an eco destination at the moment, but the house consumes very little power: rain water is used for running water, all the bulbs are low wattage, and a passive backup battery powers the building when brownouts plague the city.  There is also filtered water and delicious Haitian food prepared by Fany, the resident cook.

La Maison Georges Anglade just opened, so there still is a lot of work to be done and PEN American Center will work closely with PEN Haiti as it develops its programming. At the moment, PEN Haiti is receiving delegations from other PEN centers such as Québec PEN; sometime this year it will opening its doors to the wider world. It’s hard not to feel that La Maison Georges Anglade may soon become a crown jewel of the global PEN community.

If you’d like to learn more, come see PEN Haiti President Jean-Euphele Milcé and Vice-President Emmélie Prophète at our PEN World Voices International Festival of Literature this year in April.