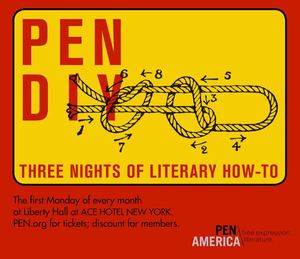 “If your mother tells you to do a thing, it is wrong to reply that you won’t. It is better and more becoming to intimate that you will do as she bids you, and then afterward act quietly in the matter according to the dictates of your best judgment.” – Mark Twain, Advice to Little Girls

At PEN, we like to do the opposite of asking people to stay quiet. Which is why we’re thrilled to welcome three very proudly outspoken women to launch our PEN DIY series for 2015. Erica Jong, Jennifer Weiner, and Amanda Palmer will be headlining our first three PEN DIY events at The Ace Hotel’s Liberty Hall. What these women all have in common is their affinity for saying what they want as loudly as they want, whether in print or on stage. Moderating two of these events will be Emily Gould, who knows a thing or two about facing hostility.

Erica Jong is the author of Fear of Flying, a worldwide phenomenon that was highly acclaimed during the development of second-wave feminism. Her novel, Fear of Dying, will be released in September of 2015.

“I think feminism means what it has always meant—women want to use all their gifts, all their talents and be judged impartially for them. I don’t think feminism has ever meant anything else.”

Amanda Palmer is a musician and blogger known for pushing boundaries in both her work and her personal life. She recently published a nonfiction book exploring the topics she addressed in her TED Talk “The Art of Asking.”

“There’s something advantageous about being a woman in rock versus, say, a woman in chemistry or construction. There’s definitely a built-in sexism across the board, but I think you’re afforded a degree of freedom in rock because, historically, the rules have been flexible.”

Jennifer Weiner is a writer, television producer, and former journalist. Her first novel, Good in Bed, was published in 2001, and her second novel, In Her Shoes, was made into a feature film starring Cameron Diaz and Toni Colette. Weiner has spoken out widely against what she sees as a male bias in the media and publishing industry.

“I think it’s a very old and deep-seated double standard that holds that when a man writes about family and feelings, it’s literature with a capital L, but when a woman considers the same topics, it’s romance, or a beach book—in short, it’s something unworthy of a serious critic’s attention.”