PEN DIY: Justin Vivian Bond on How to Take a Flying Leap 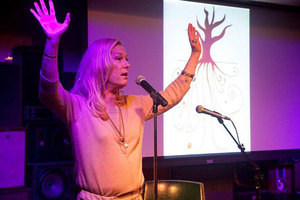 Cabaret messiah Justin Vivian Bond took the DIY stage by storm on November 3rd, giving a loudly appreciative audience a crash course in writing from the gut. In PEN’s DIY feature, Bond taught the art of improv and creating a character in five steps—a challenge the singer and performance artist of Broadway’s Kiki and Herb knows all too well. Bond, who prefers the genderless pronoun ‘v’ and sometimes goes by Mx Bond, is also the author of the Lambda Award-winning memoir Tango: My Childhood, Backwards and in High Heels.

Step 1: Know Yourself (Or Who You Want to Be)
Bond joked that “If you’re writing, you might want to have a point of view.” Amidst audience laughter, v elaborated on this seemingly obvious tip by pointing out that “people don’t want to have a point of view because then you have to take responsibility.” As a boy who sashayed around his house on tiptoe, and grew up to be a trans-cabaret sensation and Tony-nominee, Justin Vivian Bond is no stranger to having a strong opinion, be it on the acceptable usage of gendered language, or a definition of writing: “I don’t write, I just make things up.”

Step 2: Fill Up the Tank Before the Trip (Let’s Get Unconscious)
In order to take a flying leap in your art, Bond stressed, you have to trust your own instincts and not judge yourself too harshly. Bond revealed how v creates characters from the gut, building them sentence by sentence through repetition and audience reaction. Audience members were treated to rousing memories of v performing on the LA cabaret scene—taking mushrooms in a cab on the way to a show, hurling projectiles at guests who walked out early, and striding on stage without a script. “Trust what’s in there,” v said, “Fill up with juicy material, and let ’er rip.”

Step 3: Follow the Surrealist Tranifesto (Nothing Makes Sense Anyway, So Whatever…)
“I don’t like to be pinned down to a topic,” Justin Vivian Bond said, “unless it’s something vague, like pearls.” Bond revealed how v sometimes deals with writer’s block: by opening André Breton’s Manifesto of Surrealism and picking a sentence to spur inspiration. People don’t expect things to make sense, observed Bond, but they’ll attach meaning to it eventually—v compared this to the experience of listening to foreign songs, which can be enjoyable even if you don’t understand the meaning of the lyrics.

Step 4: Leave Breadcrumbs (And Bring Your Own Bone)
Instead of writing a script, Bond creates outlines (bones) and sprinkles ideas in between (breadcrumbs). Not adhering to a script keeps the work loose, allowing for digressions and serendipitous connections that might not have occurred otherwise. Standing in front of a slide of a watercolor scattered with croutons, Bond said, “I think it’s important to evolve and one of the great things about not trying to be perfect all the time is that as you get older, you become even better at what you’re doing instead of being so uptight about being perfect.” Then v treated the audience to a mellow Joni Mitchell number.

Step 5: If You Don’t Stop Yourself, Gravity Will (Splat!)
Fittingly, Bond ended the night with a quote by André Breton. Leaving audience members to ponder the resonances (real or imagined) between the surrealist’s words and Bond’s DIY presentation, v exclaimed, “That’s a fantastic ending, ladies and gentlemen. I’ll take that white wine now.”

Building on oral traditions, parables, and the rich history of artists as unpretentious makers, PEN DIY celebrates how literature can be approachable yet unexpected, and how it can help us make sense of our lives. New talks by acclaimed writers and artists the first Monday of every month.