PEN DIY: Erica Jong on How to Write YOUR Book 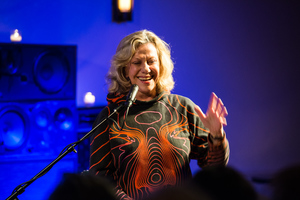 Discussed: psychoanalysis, what it means to be sexy, Fifty Shades of Grey, fame.

Erica Jong opened the 2015 PEN DIY season with a passionate talk on how to write the book of your heart. She is an acclaimed writer whose debut novel Fear of Flying, which takes an unflinching look at women’s sexuality, sold more than 20 million copies worldwide.

Taking the stage after host Emily Gould called her “legendary,” Erica Jong quipped: “I used to be the happy hooker of literature, and now I’m legendary.” In her talk, she shared her thoughts on Fifty Shades of Grey (“No one even copyedited this!”), money (“In the beginning I got advances that would have paid for two dinners”), and writing about sex (“You get into bed and disaster ensues”).

Telling the truth, Erica Jong says, is never popular. Jong has been through the ringer that is fame in America, and disapproving family members. She began her talk by asking the audience to think of Orhan Pamuk, Dante, Ovid … all punished for telling a tale which told the truth.

Attacks are a compliment, Jong says. They mean you’ve done something right.

R – Reveal (Writing is heroism—write what you need to write)

Writing presents the possibility of changing something in someone’s heart. As a girl, Jong said, she would finish a book and kiss the author photo, amazed that a person who was dead could reach up through the page and move her.

The way to write is to reveal your own truths, by writing about something you know in a way other people don’t.

Part of writing the book of your heart is the ability to ignore the publishing world. Ignore what your publicist, audience, and family want to hear—by the time you’ve finished writing, publishing trends may very well have changed completely.

You may read Fifty Shades of Grey and think, “I can do better,” but that doesn’t mean you’ll sell a hundred million copies and get a contract with a sex toy manufacturer. Jong’s best writing advice? Keep going. Don’t look back. Finish your story.

Forget securing a huge, life-changing advance. Write the book of your heart instead.

Jong says that when Fear of Flying became wildly successful she was more surprised than anyone else. “I hope that happens to you,” she says, “but you can’t count on it.”

If you write something that is “new and true,” that’s news.

Be humorous and truthful: if you don’t write about sex humorously, you can’t write about it at all. Jong defines being sexy as being open with people: “You can’t escape self-revelation when you take your clothes off with another person.”

Building on oral traditions, parables, and the rich history of artists as unpretentious makers, PEN DIY celebrates how literature can be approachable yet unexpected, and how it can help us make sense of our lives. New talks by acclaimed writers and artists the first Monday of every month.