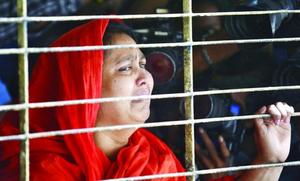 Second blogger killed in brutal attack in one month

Washiqur Rahman Babu is reported to have blogged using the name Washiqur Babu on a number of websites and forums, including Shocholayoton, as well as on social media. He was attacked by three assailants with knives some 500 yards from his home in Begunbari, Dhaka, on Monday morning. He was declared dead on arrival at a hospital. Police have launched an investigation and recovered the weapons used in the attack. In addition, two men have been arrested over the murder, however, a third man remains at large. No group has so far claimed responsibility for the attack.

Babu is the third blogger to have been murdered in Bangladesh in the past two years, and the second in a little over a month. On 26 February, secular writer and blogger Avjit Roy was hacked to death close to the Dhaka University campus. His wife was also critically injured during the attack.

PEN is deeply alarmed at the ongoing pattern of violence against writers and journalists in Bangladesh, who appear to be targeted with impunity solely for the peaceful expression of their views, and calls on the Bangladeshi authorities to ensure that the necessary measures are taken to bring all the perpetrators to justice.