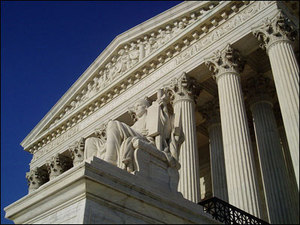 Our legal challenge to the U.S. government’s secret, warrantless surveillance program is back in the news today.

The ACLU has filed a brief with the U.S. Supreme Court on behalf of PEN and its co-plaintiffs Amnesty International, Human Rights Watch, and others, asking the court to reject an attempt by the Obama administration to overturn an appeals court ruling that the case should proceed to trial.

As the ACLU’s Jameel Jaffer, who is lead attorney on the case, explains in his blog post announcing the filing today, PEN and our colleague organizations are concerned that our international communications may be secretly monitored under the National Security Agency’s post-9/11 surveillance program, which Congress sanctioned in the 2008 FISA Amendment Act. The coalition of organizations filed suit immediately after the Act was passed, only to have a district court dismiss the case, arguing that because the organizations could not prove our communications are monitored we lack legal “standing” to sue. But last year, the Second Circuit Court of Appeals rejected that argument and ruled that we can have our day in court. The Obama administration appealed.

Our Brief in Opposition, asking the Supreme Court to let the appellate ruling stand, is here.