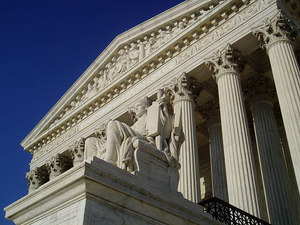 In 2008, Congress amended the Foreign Intelligence Surveillance Act (FISA), which was enacted in 1978 after revelations that the government had been spying on innocent Americans, including leading writers and cultural figures. The FISA Amendments Act of 2008 significantly weakened the protections in the original act.

In Amnesty v Clapper, which was filed on behalf of a broad coalition of human rights, labor, legal, and media organizations, PEN asserted at the Supreme Court that its routine communications with writers and human rights activists overseas are vulnerable to monitoring under the program, and called the law “an unnecessary abandonment of constitutional protections prohibiting ‘general warrants’ and unreasonable searches.” PEN also insisted that the kind of dragnet surveillance the law allows not only threatens the ability of American writers, journalists, and human rights advocates to carry out their international work, but also undermines the right of all American citizens to engage in private telephone and Internet conversations without fearing that the government is listening.

Here is the full text of Article 3 of the PEN Declaration on Digital Freedom:

3.  All persons have the right to be free from government surveillance of digital media.

a. Surveillance, whether or not known by the specific intended target, chills speech by establishing the potential for persecution and the fear of reprisals. When known, surveillance fosters a climate of self-censorship that further harms free expression.

c. When governments do conduct surveillance—in exceptional circumstances and in connection with legitimate law enforcement or national security investigations—any surveillance of individuals and monitoring of communications via digital media must meet international due process laws and standards that apply to lawful searches, such as obtaining a warrant by a court order.

e. Government gathering and retention of data and other information generated by digital media, including data mining, should meet international laws and standards of privacy, such as requirements that the data retention be time-limited, proportionate, and provide effective notice to persons affected.

As you can see, Article 3 of the Declaration covers surveillance, data mining, and government monitoring, and states that “All persons have the right to be free from government surveillance of digital media.” These issues are all implicated by the FISA Amendments Act and have a devastating effect upon human rights work. As PEN’s Freedom to Write director Larry Siems explained when we first filed the lawsuit:

Like our coplaintiffs in the case, which include human rights, labor, legal, and media organizations, we rely on confidential international communications to carry out our work. The trust we depend on is hard-won: those with whom we work abroad have often been monitored, imprisoned, or persecuted in their countries, and some of them are living and working in countries where a history of cooperation between their governments and U.S. intelligence agencies has left a legacy of fear and distrust of the United States. The fact that the National Security Agency (NSA) now has nearly limitless authority to monitor our international calls and emails severely compromises our ability to communicate freely with our endangered colleagues, undercutting our ability to ascertain and serve their needs.

In its current form, the FISA Amendments Act permits the U.S. government to spy upon civilians, which would clearly violate articles (a) and (b) of the Declaration. The heart of our Supreme Court case, however, is a basic legal question of “standing”. Standing requires plaintiffs to have been harmed in order to bring a lawsuit. Right now, PEN and our co-plaintiffs are stuck in the circular logic that PEN is unable to prove that it has been harmed because the FISA Amendments do not require the government to tell us whether our communications have been surveiled. No plaintiff, under these circumstances, would be able to show harm or, indeed, ever challenge the FISA Amendments Act. If upheld by the Supreme Court, this Catch-22 situation would also violate article 3(c), which requires full due process. The Supreme Court heard oral argument on this case in late October 2012, and we expect to hear the results soon.

As our analysis above shows, the government of the United States should rescind the FISA Amendments Act. The U.S. Supreme Court should uphold the Constitution by ruling the Act unconstitutional.

Find out more about this case:

PEN is deeply concerned about the effect of surveillance upon creativity. For an excellent meditation on these issues, check out this panel Life in the Panopticon: Thoughts on Freedom in an Era of Pervasive Surveillance from our 2012 PEN World Voices Festival.  Or read Cato Institute fellow Julian Sanchez’s opening remarks here.