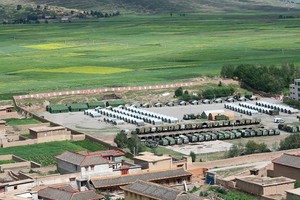 In February 2012, the government of China cracked down on freedom of expression in Tibet by cutting Internet and mobile phone service in a more than 30 mile area around Kardze Autonomous Prefecture in Sichuan Province, where citizens had clashed with police and at least two Tibetans were killed. The crackdown was a result of a string of self-immolations by Buddhist monks and nuns, as well as laypeople, who set themselves alight in protest against conditions in their monasteries and a lack of freedom in Tibet in general, and there were reports that eastern Tibet was under de facto martial law. A week earlier, a crew from CNN was detained by authorities while trying to report on the situation and was then thrown out of the region, and several other foreign journalists were prevented from entering the prefecture. PEN also received reports that Tibetan language print and copy shops were shuttered, and that Tibetan language blogs and websites were shut down. China already maintained a nationwide policy of Internet censorship.

Here is the full text of Article 2 of the PEN Declaration on Digital Freedom:

2.   All persons have the right to seek and receive information through digital media.

a. Governments should not censor, restrict, or control the content of digital media, including content from domestic and international sources.

b. In exceptional circumstances, any limitations on the content of digital media must adhere to international laws and standards that govern the limits of freedom of expression, such as incitement to violence.

c. Governments should not block access to or restrict the use of digital media, even during periods of unrest or crisis. Controlling access to digital media, especially on a broad scale, inherently violates the right to freedom of expression.

d. Governments should foster and promote full access to digital media for all persons.

As you can see, Article 2 of the Declaration addresses censorship by providing that “All persons have the right to seek and receive information through digital media.” 2(a) and 2(c) state that governments should not censor or restrict digital media, and that governments should not block or restrict access—even during periods of unrest. In China, the government restricted mobile phone service in a 30 mile area. Also, the government reportedly shut down Tibetan language and print shops. These actions would all violate Article 2. China may argue that this action falls under the exception provided under Article 2(b), which provides that a government can limit the content of digital media in the case of incitement to violence; however, there is no evidence that anyone advocated for violence in this situation and the blocking of the internet in a 30 mile area would not have been proportionate to the offense. In addition, the government reprisal against CNN, which had its crew detained, would violate Article 1 of the Declaration (explained here), which governs the targeting of individuals.

As our analysis above shows, the government of China should stop censoring all media in the country, lift all restrictions on digital media, and allow foreign and domestic reporters full and unfettered access to the region and people.

Find out more and take action: