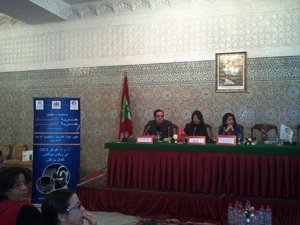 The second day of the UNESCO conference on Freedom of Connection, Freedom of Expression in Marrakech featured more heated debate and discussion. I presented PEN’s Declaration on Digital Freedom, introducing PEN’s global work as well as the changing nature of our advocacy, which increasingly includes writers in the digital sphere. In a room full of software engineers and legislators, I also explained what makes PEN a special voice in these discussions: the 90-year history of activism of our membership and our ability to provide an ethical and moral perspective. PEN offers the “long view” of the dilemmas confronting human rights in the digital age.

During the conference, we also heard from officials from the government of Morocco who are implementing new policies for freedom of information and data retention. There are currently 16 million Internet users in Morocco, including 4-5 million Facebook users, and some 34,000 Moroccan web sites utilizing the domain .ma.  The vocal civil society groups asked challenging questions. In fact, after most panel discussions, questions were directed at the government and not the international panelists. Locals explained to me that there are very few opportunities for Moroccans to directly confront goverrnment officials, so they wished to use the time to question everything from the authors of white papers to proposed regulations. Morocco passed a new constitution in 2011, but the monarchy has only slowly been incorporating some of its more liberal provisions.

We also heard from Hisham Almiraat, a Moroccan who is the dynamic director of Global Voices Advocacy, and Gregory Engels, a voluble entrepreneur and member of the German Pirate Party, a progressive group that embraces crowdsourcing and direct referendae in its decisionmaking. Bill Dutton, professor at Oxford University, presented findings from a study of the ethical values of Internet users throughout the Middle East.

Throughout the event, UNESCO’s translators shifted nimbly between Arabic, English, and French in very technical language–so much so that they demanded a break after several sessions ran overtime. Marrakech is an astoundingly beautiful city, where, at least for a tourist, various cultures and religions seemed to intermingle harmoniously. Impediments to free expression such as lese majeste and blasphemy laws remain in place, but debate and dialogue will hopefully be here to stay.

NOTE: In my previous post, I referred to ICANN’s Internet Protocol version 4 as Pv4 and its version 6 as Pv6. They should be IPv4 and IPv6.