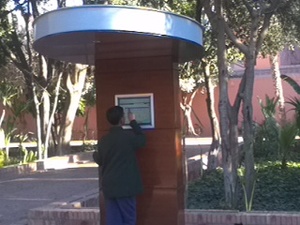 I just ended an eventful and controversial day at the UNESCO conference on free expression in Marrakech, Morocco, where I was invited to speak about PEN’s new Declaration on Digital Freedom.

Morocco approved a new constitution in 2011, which granted further powers to parliament, yet many of the old laws have not been harmonized with the new constitution. This made for some lively debates.

The conference opened well, with the usual honorifics and expressions of gratitude that normally accompany diplomatic conferences. But after a somewhat milquetoast opening session, during which the government explained its plans to develop the Internet and protect free expression, things began to heat up. Bill Dutton, visiting from Oxford University and the author of the paper that gave rise to the name of the conference (Freedom of Connection, Freedom of Expression) spoke about the “ecology” of free expression, in which it is dangerous to only advocate for single issues over others. He welcomed the rise of the “Fifth Estate,” which consists of Internet users who bind together on issues that concern them to hold the First Estate (the clergy/intellectuals), the Second Estate (noblemen/business), and the Third Estate (the government) accountable. The Fourth Estate is the press, which, he argues, is already intermingling with the Fifth Estate productively as bloggers and Tweeters join forces to cover news.

The conference kicked into high gear during the third session. Hanane Boujemi from the Dutch NGO Hivos moderated the panel, which examined the development of electronic news media in Morocco. Authors of a government white paper sited the need for laws and standards that distinguish between “real” journalists and bloggers, who may have no training and may not be accountable to anyone. The blogger Larbi El Hilali responded by complaining about the existing lese majeste laws, which prohibit criticizing the king, because he said they are not appropriate to today’s conflicts. He cited the case of a parody of the king that was shared over Facebook by some 20,000 users, many of them youth. Would that subject all of them to the lese majeste laws, he asked facetiously? He argued that the government is being too quick to legislate, when it should in fact be responding to user behavior rather than promulgating laws from above.

The final panel examined the technical architecture of the Internet with presentations from Internet Society (ISOC) and ICANN, the domain name NGO. ISOC noted the inherently democratic nature of the Internet, and that original TCP/IP protocol embraced the spirit of the Universal Declaration of Human Rights through decentralization. ICANN staff pointed out how its new domain name registration protocol, vp6, requires less identifying information than previous iterations, hopefully making it more private and safer for activists. Finally, Moroccan social entrepreneur Tarik Nesh-Nash spoke eloquently and passionately about web sites he created to crowdsource the new constitution (reform.ma), monitor elections, end corruption, and promote budget transparency. A former software engineer from Microsoft, he is bursting with ideas about how Internet users can get the government to listen.

Photo (above): A boy uses an Internet kiosque in the Cyberpark in Marrakech.