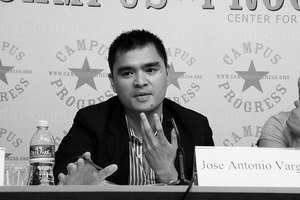 PEN American Center thanks our members and supporters for their role in securing the release of writer and immigration activist Jose Antonio Vargas, detained in Texas yesterday by the U.S. Border Patrol.

Vargas was released late Tuesday after being held by Border Control through the day under threat of deportation, with the proviso that he appear before an immigration judge. US Homeland Security issued a statement saying that Vargas was released because he has no prior criminal or immigration record. His lawyers will now seek to have the action against the writer suspended and do not expect Vargas to be deported.

Vargas was detained at an airport Border Control station as he prepared to board a flight from McAllen to Houston. He was in the small Texas town, just north of the border with Mexico, for a press conference and vigil in support of recent detainees from Central America with whom he is now reportedly being processed at the McAllen Border Patrol Center.

Vargas, who arrived in the U.S. from the Philippines at the age of 12, has worked as a journalist for the Washington Post, where he won a Pulitzer Prize in 2008, and the Huffington Post. His contributions to American journalism and literary cultural life in his 20 years here have been significant in a way few can match. And yet these same contributions have made him a target of immigration officials. Since bravely unveiling his undocumented status in the New York Times Magazine in 2011, Vargas has continued to write and speak publicly in the ongoing immigration debate, advocating for the rights of the eleven million undocumented residents of this country.

In an essay published Friday by Politico, Vargas spoke of his fear of arrest, writing: “In the last 24 hours I realize that, for an undocumented immigrant like me, getting out of a border town in Texas—by plane or by land—won’t be easy. It might, in fact, be impossible.”

PEN American Center stands with Vargas in insisting that all people—regardless of immigration status—are entitled to speak and write freely without fear of detention, deportation, or ostracization from their families and communities. We call for Vargas’ immediate release.