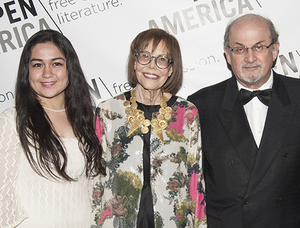 The Board of Trustees and staff of PEN America are deeply saddened by the loss of longtime Trustee Barbara Goldsmith. Barbara has been a passionate and enormously generous supporter of PEN’s freedom of expression advocacy programming for more than three decades. Through the annually conferred PEN/Barbara Goldsmith Freedom to Write Award for an imprisoned writer of conscience, she created visibility symbolically for all writers who risk life and livelihood to tell truths that reveal oppression. Of the past 39 recipient writers, 36 have been freed due in part to the media attention and moral pressure generated by the award.

Ma Thida, the 1996 Award recipient who was jailed in Myanmar, gives thanks to Barbara “for the encouragement to writers in prison that what we had done for the freedom to write was right and for the sense of security that comes from not being ignored by the rest of the world.” We will miss her and offer our profound sympathy to her family. In Barbara’s honor we will perpetuate her legacy and “keep the spotlight on” all writers who risk imprisonment, torture, disappearance, and death as the price of free expression.