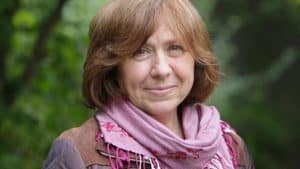 NEW YORK—PEN America stands in solidarity with Russian writers who share our ideals and those of the PEN Charter in strong defense of free expression and other human rights, and views with concern the recent actions that have led prominent members of PEN Russia to resign in protest.

Nobel Laureate Svetlana Alexievich, the best-selling author of detective fiction Boris Akunin, and the poets Lev Rubenstein and Olga Sedakova lead a list of writers who have renounced their membership. The protest stems in part from actions taken by the leadership of PEN Russia against other members, including the expulsion of journalist Sergey Parkhomenko after he advocated for the release of a Ukrainian filmmaker sentenced to 20 years in prison for his work in Russian-occupied Crimea.

“Now more than ever, it is essential for American and Russian writers to stand together in defense of freedom of expression, diversity of opinion, and truthfulness,’’ said Executive Director Suzanne Nossel. “At PEN America, it is our foremost commitment to build solidarity around our principles and those expressed in the PEN Charter, and that commitment undergirds our support for the Russian writers who have with great deliberation stood up for independent thought and open debate.’’

On December 28, Parkhomenko, currently a fellow at the Kennan Institute in Washington, DC, was expelled from Russian PEN for life by the executive committee for “provocative activities incompatible with the aims and remit of the Russian PEN Center.” Earlier in December, Parkhomenko with other PEN Russia members, as individuals, wrote an open letter to Russia President Vladimir Putin asking for a pardon for Sentsov, now held at a Siberian penal colony on what his lawyers and human rights activists dismiss as trumped up charges of terrorism. Later, Parkhomenko posted to social media protesting the response by PEN Russia’s leadership to the letter and its decision not to take a stronger stand urging Sentsov’s release.

In addition to Parkhomenko’s expulsion, PEN Russia suspended the membership of poet Grigory Petukhov for one year amd warned the writer Marina Vishnevetskaya for distributing publically information about the center leadership’s December meeting. Since the actions came into force on January 10, several dozen Russian writers have protested the decision and some have announced that they are resigning from membership.

“We appreciate the efforts of courageous Russian writers seeking to protect the open debate and even discord that are hallmarks of robust civil society, and have come under intense pressure in Russia,’’ Nossel said. “It is difficult not to retreat, especially when a repressive government wields power, but to give in is to reshape an organization’s mission and purpose and forfeit the credibility that comes from a group purporting to speak for writers.’’

In January 2016, PEN America hosted a delegation of independent Russian writers led by the acclaimed novelist Ludmila Ulitskaya, who stepped down as Vice President of PEN Russia and later left the organization. During her tenure, PEN Russia had been one of the few organizations in Russia offering views criticizing the war in Ukraine.

PEN America stands at the intersection of literature and human rights to protect open expression in the United States and worldwide. We champion the freedom to write, recognizing the power of the word to transform the world. Our mission is to unite writers and their allies to celebrate creative expression and defend the liberties that make it possible.