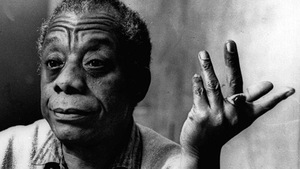 In these days of American Weimar, with a counterfeit president for a fake democracy, it is a deeply inspiring and absolutely necessary weapon and shield of true self-consciousness against an oppressor nation, its lieutenants, deranged pets, hired killers, artists, academic courtesans, and the dangerously uninformed, to reflect on the obvious grandeur, wisdom, and strength of that tradition of the Afro-American intellectual, artist, teacher—and know that it is revolutionary and democratic. Jimmy B. is high up in that tradition. Certain Skip Gateskeepers try to make trouble by whispering, Holy Doo-Doo, if not for Baraka and those other over-the-top colored types, Jimmy might have passed blazing into the Britannica pantheon of white right. But alas, there are neither colored mens nor womens in that cave of virtual significance. They said DuBois would have made it but he always be talkin about real shit.

In the fifties I did criticize Jimmy in some review, complaining in my infantile leftist mode that while Jimmy was playing the distressed aesthete in Europe, and moaning that instead of confronting the racial animal we should all try to love each other, my rejoinder was that we should get back to our real work: cutting throats. Actually, given the recent seizure of the presidency, which super-whitened the already amazingly Caucasian crib, this is an idea whose time has apparently never split.

When Jimmy returned to the U.S. with some visible hereness, it was to rise at the very center of the civil rights movement, often at Dr. King’s side. To me, three voices heroically characterizing the fieriest period of the civil rights movement are Dr. King, Malcolm X, and James Baldwin. That is one of the principal reasons this brother is respected and loved, particularly by black people. Because he was not just a cocktail-party social theorist, or a typewriter paladin, but a great artist whose written word and spoken word came fully to reflect his real-life practice and fearless humanity in the world. Dr. DuBois was attacked for the crime of being an activist and speaking out against nuclear weapons in the fifties. He was attacked, as Jimmy was later, for being a people’s democrat, which is indeed revolutionary in what he called “the last white country on earth.” Like DuBois, Jimmy Baldwin was attacked for being a social activist as well as an innovative grand master of thought and language.

But the mustard-seed–sized ideology of the Gateskeepers and academic Rent-a-Cops of the imperialist superstructure, its institutions, and the philosophies it is built to forward and maintain, despite all cosmetic hocus-pocus and gibberish, still gives off the insidious perfume of a crowded commode. Imagine, in the face of Notes of a Native Son, The Amen Corner, Go Tell It on the Mountain, Giovanni’s Room (Jimmy was never in no closet), The Fire Next Time, the great Blues for Mr. Charlie, or the still unsung masterwork Evidence of Things Unseen, the stooges want to raise up some Johnny-one-note sycophant of literary, social, and political conservatism, who is really celebrated so energetically because he dismissed both black nationalism and Marxism, and for a boffo exit let the heebie-jeebies castrate him symbolically (literarily, of course—it’s called deconstruction, you dig?), and then as dénouement turn his soul into an insect (the National Book Award). Jimmy, like W.E.B., was in the great social-aesthetic tradition of the Afro-American people, an oppressed nation with the right of self-determination. Because of slavery and national oppression, black people have a common though not monolithic psychological development which is expressed in a generally common culture, though all nations and peoples have two cultures: the culture of the oppressed and the culture of the oppressors. These are defined as contradictory ideological poles of class, as form and content.

So Mr. One-Note expresses the artistic culture of the conservative wing of the black petty and national bourgeoisie. Baldwin, until the day he left here, was in the main a voice of the Harlem toilets. Once more, check out evidence. It was DuBois who laid out the psychological double consciousness of Afro-America, where black people are torn between being obviously black and de jure, albeit Native, Americans. But the legacy of that teaching today is that we have come to know we are both, and that those contradictions are actually two edges of the terrible swift sword of Afro-American struggle, wielded with such profound and dangerous beauty by giants like James Baldwin. As far as his going back and forth to the south of France, after his honorable service in the Afro-American people’s democratic volunteers, under the inspired and inspiring leadership of Martin Luther King and Malcolm X during the height of the civil rights and black liberation movements: During this period Jimmy was in the United States regularly. That’s when we would go to West 100th Street, where his brother David would try to waste both of us with cavalier quantities of spirits. And thus fueled, we’d go off dialoguing under the blue-black city night, looking to peel the apple right down to the core. In those later years, the main reason Jimmy went to the South of France was to write, since he was, independent of his will, obstructively visible and very public when sailing around in this place. David was our contact and connection, my man, the laughing raconteur of West 100th Street, but now they’re both gone, and we must conjure all our strength to face the crowd of wooden Negroes who, lacking any culture but that of the bourgeois white behind, now energetically join the class of savage right-wing bushwhackers. But if we are true to that irrepressible tradition that animated our man Jimmy Baldwin, listen to this, “The western world is located somewhere between the Statue of Liberty and the pillar of salt,” or, dig this droll film review titled, “The Devil Finds Work.”

Even when I criticized Jimmy as a young man, when I first saw him as an undergraduate at Howard University, with The Amen Corner, I still understood that his direct TV eyes had daunted and welcomed me into our writing, from the cover of Notes of a Native Son. And disguised behind the infantile “yo brother” I hurled at him, he saw the younger brother, as he called me, the younger brother chiding the older brother to get on it. Because if we’d read and understood Baldwin, we knew that couched and loaded within his sermonic expression, his public stature, was a deep religious regard for righteousness and a moral opposition to evil anywhere it appeared. And as I noted at the Black Arts Convention in ’84, the religious hypocrisy to Jimmy was the same as the social hypocrisy. White America was no more democratic than it was religious, black people were no more citizens than white Americans were Christians, so that in many critical points in the works, Baldwin would use the Biblical text as the Amen, the shout of recognition, the “Yes, Lord,” of the witness, that what he had seen and felt was truth.

For Jimmy, spirit was the animating reality of our living consciousness and relationship to the world. It was what made us human or not. His constant metaphor for the spirit of white America is menace, danger, murder, atrocity. His own work sought to evoke the spirit and truth of the excitement and drama of the church from its evocative Wordship, its altar from whence the Word would come, that high place. And so the grandness of Baldwin’s written prosody was of speech made into text so that the spirit of the written word conveys the moving life of the speaker. Baldwin is able to give us the motion of the peripatetic observer observing the Atlanta horror in its complexities, bearing witness to the individual and collective guilt of white America and its petty bourgeois Negro management class with the precision and deftness of his own Jimmy self at some non-cocktail, non-party, where the squares hang on the walls like wallpaper waiting to be pasted.

The spirit of Jimmy’s work is of a high moral prophetic vision, the witness who has been buked and scorned like John the Revelator, digging the coming attraction on Patmos, the spirit of that grimly beautiful message to the churches. What was grim was what Jimmy spoke of when he said that white America thinks that black people’s religious beliefs are childish. But that’s the trick, the grim payback, because as DuBois laid out, suppose you really believed in God? Suppose you really believed in all that—the Old Testament, the New Testament? Suppose you believed one night you might meet the Savior walking down the street and you were that blood, and here was the lamb that had promised to deliver you: “Mine eyes have seen the glory of the coming of the Lord:/ He is trampling out the vintage where the grapes of wrath are stored;/ He hath loosed the fateful lightning of His terrible swift sword . . .” What that eternity of humming meant, even after the drum got took away, at the coming of the Lord: This gonna be your ass, all you heathens, this gonna be yo natural ass. This was, likewise, Jimmy’s religion, and his spirit.

I had a great chat with @TheWayWithAnoa and Dr. Olveen Carrasquillo about Covid-19 vaccine disinformation in BIPOC communities. The recording is available below. A big thank you to @PENamerica for facilitating this important conversation. https://twitter.com/firstdraftnews/status/1367886789155971075

“The victory here is in the long game, and that legally, we have set a precedent in ways that help bolster a free press for years to come," says PEN America's @attorneynora on the settlement of our lawsuit against former President Donald Trump: https://bit.ly/3rj1hDE.