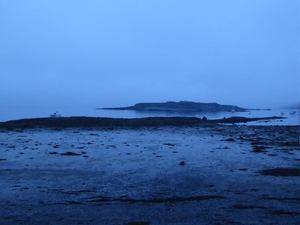 This week in the Guernica/PEN Flash series, we feature a piece by Kristabelle Munson. Subscribe to the series and get new flash delivered to your inbox twice a month—no spam or news, just stories.

In the time of the nomads, I ate well. Chariot driving came naturally to me. I slept on pelts in the mornings, oblivious to my handiwork. My troubles began when Hermes pissed off Big Poppa.

The chariot axle busted in a match of chicken with Apollo. The nymphs giggled when my loin cloth showed too much. All that crawling underneath the chassis to harness the possessed horses. Like most mortals, the effects of living on Mt. Olympus got to me after a while.

Too much ambrosia without mutton got my mouth cracked open when a Naiad strummed a lute, but I didn’t have the parts to seal the deal. Big Poppa spent most of his time changing into a swan to check out hotties by the lake.

He came back from the kerfuffles he caused with a sheepish look on his face. I was his posse and his chauffeur.

The mortals Big Poppa freaked on could not handle the stress. Human life expired by the time they were piled into the back of the chariot. Big Poppa belched and staggered into Hera’s chambers to get whipped, leaving me with the body. There was no hiding the body on Mt. Olympus, so I went cruising.

The sling held the body in the rumble seat until the last possible moment. Limbs akimbo, the body launched forward, slicing air, then repelled by the earth, before meeting sand. Bones bleached under the weight of the sun. In time the limbs formed ornaments of the rarest elements.

And then one day a maiden fair scared the bejesus out of me when she awakened in the back of the chariot. She didn’t speak my language, but I gave her mead and bread when she pointed to her mouth. I brought her back to the Aegean stables without telling anyone. She did chores without being asked and rubbed scented oil into my scalp after long days. I put my best pelt down for her.

She nuzzled my useless eunuch body and put her fingers to my cheek before she fell asleep. In the night I traced the outline of her back and arms. But the mornings held no memory for the maiden. In time Big Poppa spotted her and wanted to fuck her brains out. I said the word NO for the first time in my short life.

The light was blinding. The maiden and I are visible on clear nights now. Her arms spoon my back. We don’t have a name, but we make lovers glow to each other. We pull the tide towards the shore.

Kristabelle Munson was a VONA/Voices Fellow and has an MFA in creative writing from Stonecoast in Maine. Fiction has appeared in TAYO Literary Magazine and other anthologies. Kristabelle writes at PowderKeg, the urban writer’s retreat in Brooklyn and is working on a debut novel.