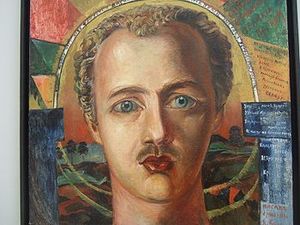 We are working on a visual translation of Tango with Cows, a key artifact in the history of Russian Futurism, modernist typography, visual poetry, and artist’s books. Printed in Moscow in 1914 on brightly-colored pentagonal wallpaper, the book combines poetry by writer, book designer, and aviator Vasily Kamensky with three drawings by Vladimir and David Burliuk. All of the poems are extremely early examples of experimental typography and visual poetry, and are set in a riotous mix of typefaces. The book is particularly known for its six “ferroconcrete poems,” which entirely dispense with the linear order of text and instead allow the reader to encounter the page spatially and associatively, like a cubist painting.

Tango with Cows offers unusual formal challenges for the translator. It is full of sound play and puns: scattered rhymes, words sharing syllables, and words nested in other words. The language abounds in local detail: names of performers in the Nikitin Circus, brands of cigarettes, restaurant signs, and period slang. To maintain the appearance of the pages, Russian expressions have to be rendered by English expressions of the same length, sometimes down to the same number of letters.

Our translation will be as typographically identical to the original as possible because we are recreating the original roman fonts on which the Cyrillic were based. We are also going to reproduce the wallpaper on which it was printed, use the original printing process (letterpress), and replicate the binding in order that the translation be as faithful to the material expression of the original as it is to its language.

Tango with Cows is among the earliest examples of books whose materiality is an integral part of their artistic expression. Kamensky’s use of typography as a visual medium and of wallpaper as substrate anticipates similar developments in artists’ books and visual poetry by fifty years. Because artists’ books are my primary artistic medium, I was drawn to Tango with Cows and began this project to make its language accessible both to me and to a wider audience.

Russian Futurism synthesizes the arts, especially those of the word and the image. Most Russian Futurist poets were also painters, and the other way around. In Tango, Kamensky creates an object that is indivisibly linguistic and visual on many levels: for example, the distribution of words on the page endows them with additional and specific meanings. But what I like most is his use of language as if it were plastic material. Approaching words as assemblages of letters, Kamensky employs the Futurist device of sdvig, or distortion, to inject modularity, pliability, and indeterminacy into the lexical field: by combining words, or breaking them off, or juxtaposing them in such a way as to highlight their form. His poetry is the logical extension of the JOU of early synthetic cubism: it is the work of a pundit.