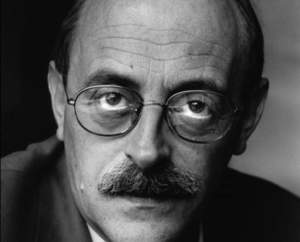 My translation of Antonio Tabucchi’s Tristano muore (Tristano Dies) came about because I love Archipelago Books. I contacted Jill Schoolman, Archipelago’s publisher, and asked if she might consider me for a project; Ms. Schoolman was kind enough to ask me to submit a small sample of Tristano muore. Right away, I realized this was going to be an incredibly challenging, fascinating book to translate: it opens with what seemed to be a poem, and then I realized it wasn’t a poem at all but a song—a polka—a famous World War II polka, “Rosamunde,” which we know as “The Beer Barrel Polka.” I might have thought simply to include “Beer-Barrel-Polka” lyrics as the opening lines of my translation, but soon realized that Rosamunda is actually a character in Tabucchi’s story, so the very first lines of the novel became a wonderful translation puzzle. The whole novel goes on this way: I’m endlessly wondering what poet or scholar the narrator is quoting or referencing. I feel like a detective.

Tristano Dies (the title, I discovered, refers to Samuel Beckett’s Malone Dies) is a book about death and the instability of the past, of memory, and the act of storytelling, and is told by a surprisingly lively narrator, given the fact that he’s bedridden and dying of gangrene of the leg. Tristano has about a month to live and has called to his bedside a mysterious character known only as “writer.” This writer will serve as a witness and will write down this narrator’s long testimony about his life and loves during World War II, his seeming heroism as a resistance fighter, and how the promise of post-World War II Italy has instead gone sour—gone gangrenous—over the course of the twentieth century. The book is a pastiche of literary, philosophical, and pop-culture references, all made by a dying man who is at times lucid, at times hallucinating. It’s a thrilling book to translate—and also daunting.

Tristano muore is a later book in Tabucchi’s long career and has been translated into fifteen languages. Tabucchi, who died in 2012, was considered one of the preeminent writers of Europe; he published over thirty books that have been translated into forty languages, and he was the recipient of many awards. Given his status in world literature, he’s underrepresented in English, with only nine of his books currently translated. So I am honored to be translating this fine novel for one of my favorite presses.