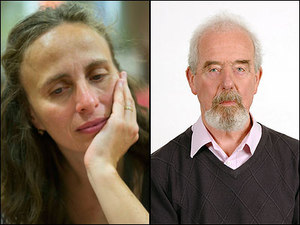 I was pleasantly surprised one day in 2010 to find in the post a copy of Andrea Tompa’s A hóhér háza, with a dedication in her own hand. We had known each other for quite some time; she had invited me to translate the Transylvanian playwright Áron Tamási’s Songbird in 2003 and István Örkény’s play Welcoming the Major in 2007, both for the National Theatre Institute in the Visegrád Drama series. This, however, was something completely different. Authors rarely pay one the compliment of an invitation to translate their own work, and this was a best-selling debut novel. A compliment indeed!

The Hungarian poet and brilliant translator Miklós Radnóti tells us that difficulty can be an attractive feature of a source text. When I first looked into my copy of A hóhér háza and saw solid pages of print—no paragraphs, no full stops before the ends of chapters—my immediate reaction was along the lines of “OMG.” After a while, however, curiosity persuaded me to see if translation was feasible, and the clever construction of the ultra-long sentences was revealed. The book may look daunting, but the cascading narrative of the Hungarian original is not a “hard read.” The translator’s task is then to keep the flow going.

The author—a Transylvanian Hungarian from Kolozsvár and now a leading theatre critic in Budapest—discusses a range of events both in her life as a teenager in the last years of the Ceauşescu diktatúra and in the lives of those around her. Transylvanian Hungarians have made a significant contribution to Hungarian literature over more than 200 years, and a notable element of their prose has been memoir. I had already translated five such Lives of aristocrats of the seventeenth and eighteenth centuries, who lived lives which had something in common with Andrea Tompa’s. Old Transylvania was an independent Principality, trapped between the Ottoman Turks and, to the west, the Habsburgs, who were not much better loved (the Ceauşescu regime too was actively anti-Hungarian). Nonetheless, despite acute difficulties old Transylvania maintained its self-belief, kept up traditional cultural values, and regarded Hungary as a foreign country. Andrea Tompa’s generation had no sultan to fear in distant Constantinople and his pashas, but they did have a Moscow-driven communist dictator and his secret police. No hostile armies devastated the countryside, but shortages of food and failure of water and electricity supply were commonplace. And no one ended their days at the oar of a galley, but relocation to remote areas punished many that tried to leave.

The Hangman’s House is therefore not just a clever piece of writing, not just a cascade of narrative, and not just the story of a young girl who is by no means an aristocrat. It is also—like earlier Lives—an insider’s critique of a troubled time. It is also a woman’s book: written by a woman, and women play the prominent parts in holding together the resilient fabric of society. In Hungarian, it has been a successful, award-winning book; is that too much to hope for a translation?