On the Precipice: Burmese Literature Post-Censorship 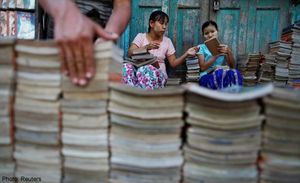 The following post appeared originally on the Dissident Blog, a project of Swedish PEN that aims to present the forbidden texts—the ones that can neither be written nor published in the writers’ own countries. Its March 2013 special edition features stories from and commentary on Burma (Myanmar), home of the newest PEN Center.

Burma or Myanmar? You know a country is in a period of flux when it can be called two names, both of them problematic, both appropriate, depending on whom you ask. Still, we are led to believe that Burma is changing and rapidly so. No longer is this a country being watched from a distance by the world at large, world superpowers are making their visits and opening up their briefcases of Democracy.

A decade ago if you wanted to holiday in Burma you’d choose from a small selection of military-approved hotels. You’d probably be followed, or at least surveyed, curiously in public and if you were to ask anyone on the street for directions then they would either be informed upon, questioned or, worse still, arrested by the military police.[1] Nowadays, at least in the cities, you can stay pretty much anywhere you like and competition is hiking up prices, particularly in Yangon. Capitalism, Western-style, is coming to town and this is signalled by giant billboards of Lionel Messi with a Pepsi can staring over the roundabouts. These kinds of multi-national companies are looking at how they might re-use abandoned factories from the socialist era and take advantage of mass unemployment in a country where thousands of young people are forced out each year to seek work.

Why has the Burmese government decided to bargain with the West now? In part because they are afraid of becoming a Chinese state. Mandalay and much of Upper Burma is owned by Chinese businesses. And, crucially, China is set to open up a trade route from Yunnan Province, through Burma’s northern border and ending up in the Bay of Bengal. Realistically the country has no option but to open trade with the West if it wants to survive. Because of all this it was of little surprise to me that when visiting Yangon in November 2012 President Obama declared a new era in international relations between the U.S. and Burma. Of course the effects of this are not all bad, potentially. As a result the new emergence of international trade and Western-led tourism has somewhat thawed a country that, for over fifty years, lived under what Burmese poet Maung Yu Py called a ‘great ice sheet’.

Alongside this Burmese literature is also changing, to the point where it’s rather hard to keep up. When I began researching Burmese poetry back in 2007 I came to realise that the poets were essentially working undercover. They were survivors (those that had survived) and the poetry was extraordinarily rich in imagery, playfulness and dense in metaphor. Some writers would regularly outwit the censorship board. This was not easy, to say the least. In 1975 the then extreme Socialist government printed a list of what could and couldn’t be published which included ‘any incorrect ideas and opinions’ or ‘anything detrimental to the ‘Burmese Sociality Program’. The resulting mass censorship over successive generations was not merely a case of writing being blocked off by the censor’s pen. In fact, during General Ne Win’s government he—becoming increasingly paranoiac—banned the use of the word ‘sunset’ (his name roughly translates as ‘sunrise’ so he presumed that writers using ‘sunset’ would be assassinating him in print). Ne Win’s ruthless Socialist agenda also forbid the colour ‘Red’ because of its Communist associations and later on, until Aung San Suu Kyi was released from periods of imprisonment and house arrest, Ne Win’s successor, General Than Shwe, banned the use of the word ‘mother’ (the reason being that this was one of Daw Suu Kyi’s nicknames, conferred to her by the people).

How does a literature recover itself from these kinds of experiences? Or perhaps the question should be: because Burmese literature was so inventive during successive regimes, what kind of literature might emerge post-censorship? When I was in the country last year there were poems being read about the Arab Spring. There were others about the harsh treatment of Burmese farmers. There were satires about power cuts and short stories that had a beginning and middle, but no end. All of these would have been instantly banned just a few years previously.

The situation is changing for Burmese publishers, too. Until recently it was routine for small press publishers to keep bribe money under the floorboards so that they would be able to publish the work they wanted to, relatively un-censored. Nowadays they can concentrate more on simply publishing the best work out there (and there is more than ever to choose from—poetry remains the most popular form of writing in Burma). Approximately one hundred poetry titles were published last year. The print run of a poetry collection will rarely exceed 1,000 copies, putting it on par with English figures.

Some of the best writers inside Burma are now getting the attention their work deserves. Leading poet Zeyar Lynn now has an international profile—he toured in North America and England in the last few years and a translated book of his poems appeared in Hong Kong in 2013. He was chosen to represent ‘Myanmar’ at London’s ‘poetry Olympics’ in July 2012. One of the most distinguished editors Moe Way (also a fine poet himself) is now expanding his The Eras Press having been invited by Yale University/National University of Singapore to read. Khin Aung Aye has recited his poems in Berlin, South Korea and England. ko ko thett, my co-editor and co-translator of Bones Will Crow: 15 Contemporary Burmese Poets[3], who writes in English, is soon to publish his debut collection, The Burden of Being Burmese, in North America. Interestingly his current anthological project aims to clarify Burmese poetry post-censorship as a literature ‘in transition’. Ma Thida, a former Fellow at Brown University in Rhode Island, and Zeyar Lynn are now pivotal figures in PENMyanmar, which was launched at the PEN International Congress in September 2013. Essentially, many literary figures, once divided along political or aesthetical lines, are now coming together to celebrate a new future for Burmese writing. Indeed, as I write this article, the second Irrawaddy Literature Festival—of which Daw Suu Kyi is the patron—is about to close in Mandalay. Last year I had the honour of opening the inaugural event of the programme with Zeyar Lynn and ko ko thett. That morning hundreds of Burmese were in the ballroom of the Inya Lake Hotel, supporting the first international literature festival ever held in the country.

With all this and more going on, one would think that Burmese literature has a rosy future. But a lot of this is surface reality. If you probe deeper and talk to many of the writers inside the country suspicion of the government and Western cultural organisations remains. In fact, several poets in Mandalay boycotted the Irrawaddy Festival this year because of apparent shoddy treatment by the (mostly British) organisers. Last year during the festival I became aware that many key Burmese writers were disappointed by their low-level of involvement in the festival. Clearly there is a need for the Burmese to decide how best to celebrate their own literature. This could take the form of an independently-run festival organised by the Burmese themselves.

Burma is on a delicate precipice, politically, and so is its literature. Perhaps the amalgamation of this belies a problem for Burmese writers in this century. Zeyar Lynn warns against new generation, post-censorship poetry being published with the “’P’ of Politics overwhelming the ‘P’ of Poetry”. This is something that extends to the wider issue of how poetry, or any literature for that matter and in any country, can be promoted as human rights-oriented over its literary merit. When we were editingBones Will Crow I was at pains to promote the anthology as a book of poetryover politics.

Inside Burma, many of the leading poets born in the 1950s, such as Maung Pyiyt Min, Khin Aung Aye and Zeyar Lynn, are now putting their faith in a new generation of poets, who self-style themselves as the ‘Post-’88 Generation’. These are writers, usually born after 1988, the year of government protests across Burma that resulted in the massacre of more than 3,000 people, including many students. One can see why the ‘Post-88’ poets might want to avoid the oppressive weight of history that Zeyar Lynn and others grew up in. There are some fine poets among this burgeoning generation, which is mainly based in Yangon. They exemplify the strange kind of freedom that Burmese literature now finds itself in. How do you create a new literature that doesn’t, in some way, look back to its past, however tragic that past may be? Unraveling these strands of new poetry in Burma is difficult and here I am reminded of two immediately ‘pre-Post 88’ poets Han Lynn (b.1986) and his brother Tha Kount Thar (’83). They, in contrast from some of the poets born just after them, are influenced by Burmese writers of all generations, as well as Western writers like Charles Bernstein and John Ashbery. “We couldn’t have created a literature without the past,” explains Han Lynn, who wrote in a recent poem: “I hear a door knock and open it / The one who enters is me”.

[1] This kind of surveillance hasn’t vanished, particularly in rural areas. When I took a bus back from Mon State last year I entered into brief conversation with two monks and a teenage boy. On stopping at a checkpoint the boy was promptly hauled off the bus and the monks were asked what I was discussing with them.‘Buddhism’ they replied.

[2] For a comprehensive study of this I recommend the book Where China Meets India: Burma and the Crossroads of Asia, Thant Myint-U, London: Faber and Faber, 2011.

[3] Bones Will Crow: 15 Contemporary Burmese Poets was published by Arc Publications in 2012. It was the first anthology of modern Burmese poetry published in the West. http://www.arcpublications.co.uk/books/ko-ko-thett-and-james-byrne-bones-will-crow-431.