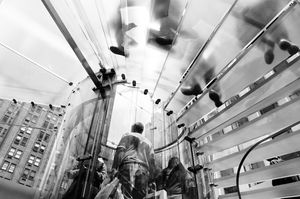 This piece was read by Richard Flanagan at the opening night of the 2015 PEN World Voices Festival. The theme of the night was “the future is now,” and leading writers from around the globe were asked to present their worst- and best-case scenarios for where the world may be in the year 2050.

About things we know not, we ought remain silent, said Wittgenstein, who, unlike me, clearly never foolishly accepted an invitation to travel across the world from his own peripheral country to speak here, in Addis Ababa, at the 2050 PEN World Voices Congress, which this year has the very timely title: “Is the Novel Dead?”

My specific subject: How has the writer’s world changed since I was born, which, for me, was the year 2015. As an American novelist from the beachside resort of Denver I don’t enjoy the prestige and power of a Malayalam poet from Madras or a Mandarin novelist from Macau. I enjoy the attention in your country that an Austrian writer visiting New York in 2015 would have there.

Which is to say: none.

But like the Austro-Habsburg Empire, the United States is now just a memory, not as it was then, in 2015, the world’s most successful third world country, but as it is now, several unsuccessful third world countries—Amazonia, Tinderama, and Ubernot, to name but three—while New York is the new Vienna, a stage set of kitsch nostalgia, subsisting on the largesse of visiting Cantonese.

But when I sat down to thumb some thoughts, my Apple iNecklace—a pathbreaking collaboration between Apple, the health industry, and Homeland Security—began garroting my throat, reminding me I have to go and cycle 30 miles on a gym bike before evening to keep my health insurance premiums down by proving I am keeping my failing body in tip-top shape.

The black market in loaning my iNecklace—a desirable chain of designer links that forms a sort of Pol Pot strapped around your neck—to some illegal European refugee who will ride for you—thin, mournful people with chafed buttocks and impotence problems who linger furtively outside elite Somalian hotels selling knock offs of much prized Chinese cyber-sex toys—is all very well if you have enough Zuckerbergs to pay them, but I haven’t. I was bezosed years ago—what writer wasn’t? Because Big Brother now isn’t the state. As we all now know it is the corporation.

There was a party that began about 1980 that went late—till 2008. It was a great party, the noise from which was so loud, the dancing so frantic, the lights so dimmed, the powdered vortex so enchanting, that no one saw until too late that the thieves had come round the back and left with almost everything in the house.

In truth, by 2015, we were already living the future and nothing was left. While democracy was enfeebled, corporations’ power had exploded, with, on the one hand the collapse of belief in the idea of politics and, on the other, an idea of living so narrowly economic, and a technology capable of a brutality and terror no one then could imagine in that time before the Apple collars. A cult of advanced gadgetry obscured for almost all the losses of what was called privacy but was more precisely not just the possibility of freedom, but its necessity.

Most powerful was the new idea that a very limited idea of progress—of material gain—was achievable without the need for freedom. It was an idea that had escaped the barbed wire of the Soviet gulag in the 1940s, taken firm hold in the China of the 1990s and become seen as the only practicable way forward for the West by the 2020s. The West had for a long time wrongly assumed that the two arose together, that one could not survive without the other.

When it became clear though that material progress did not need freedom, and when, at the same time, failing governments—in fear of the lawlessness of the favelas that the world beyond the West was becoming and their own cities already were—began to quickly erode the basis of freedom. And with no large optimistic idea to bring people together, but only a P&L for the human race that saw most people and all that they were and all that they loved as redundant, death cults—which, if nothing else, acknowledged the soul—grew attractive to many of the young.

Out of the favelas the suicide bombers came—the gunmen, the sheer rage demanding its moment of recognition, to be something more than a stillborn bead impaled on a feral abacus. The family vanished, communities self-immolated, the nation dissolved, and all that remained was what you could buy, which, for most who could no longer earn, wasn’t much.

Yet somehow imagination survives plagues, rising seas, cyclones, the befuddlement of loss, and the contempt of power. People are many things, not just a marketing segment or a political demographic. In every soul dismissed as that of a thug’s there is contained the universe.

And one such soul will be that of a writer—a writer not invited to this grand hall—a writer toiling in the favelas that ring the resorts of we the privileged who, in the belly of the beast, is writing a novel that speaks truths untrammelled by the dictates of either power or money.

And I suspect that the writer may well be using the revolutionary device with which democracy first arose and may well continue: the paper codex that you can read without risking surveillance discovering and as punishment remotely switching off your heating, your electric car, jagging your heart rate with the iNecklace’s haptic inverters.

For in here the novel may well be dead, but out there wisdom cries out in the streets and the novel will—as it always has—regard it. And that novel will remind us not only of who we are and what we have lost, but also all that we might yet be.

Short reading from "One Thousand Days in a Balloon": "Free speech is the whole thing, the whole ball game. Free speech is life itself." With best wishes to Salman Rushdie #StandWithSalman #StandWithRushdie @PENamerica