Oh, The Places You Will Go! 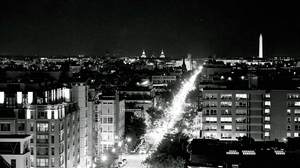 This week in the Guernica/PEN Flash series, we feature a piece by Ryan Bloom. Subscribe to the Series and get new flash delivered to your inbox twice a month—no spam or news, just stories.

In the city, at night, after even the late partygoers have tippled to sleep, the woman walks the flat roof of The Overlook Apartment, the name a reflection of its place way up high, the highest point in Washington, so high the city seems to supplicate at its steps, its door, the Monument not an imposing obelisk but a distant scar, a white-hot trauma scabbed and not, illuminated still—despite—the squid-ink night punctured by pollution, a speck of green here, calling from the Potomac, a bit of blue there, reaching from the Anacostia, the departure’s uncertainty spreading, saturating the ticket tucked in her bag, the bag lying by the open apartment door below—“Go? Stay?”—the uncertainty a stain of recursive ink, irremovable—“Stay? Go?”—the choice, the freedom to choose suffocating like a plastic bag atop her head, a hijab tied around her neck, as if an answer would erase doubt, a question’s anodyne, as if a moment’s certainty—“Unpack, stay”—would preclude the future, remove elbows from rooftop railings, forever, from all railings, forever, straighten the laden spine bowed forward, grasping at the moon as if it were a thing that could be closed in her palm, a pebble placed in her pocket, a keychain souvenir, a lucky stone, as if it were something that could be taken with—should she decide to go—taken away from the sky, away from the city stink, a tincture of immortal summer heat—the thin linen nightshirt stuck to her olive skin, to her shoulders and stomach and the backs of her knees—and exhaust, the cars’ perspiration and her own, all of it scaling the Overlook’s façade, meeting her at the top, the apex, the place where poetry blooms—“Slings and Arrows and Arms against a Sea”—her decision to stay, to go, her young life so young still, the balls of her bare feet lifting from the ground, soot-stained, her thinly veiled body, her chest, pressed against the railing, balancing, hanging, open to his embrace—“Go? Stay?”—her decision now, the woman, the girl, thinks, here in this ephemeral A.M., the moon beginning to escape her reach, to sink beneath the surface, the horizon splitting open like a blister, bleeding pinks and reds and blues, this is it, this decision, the rest of her life subsumed in an instant—“Stay? Go?”—as if with the crown of orange light before her and the pale glow behind she could possibly choose, possibly say, “You, you, my midnight dream, my mourning sun, you are the one to follow into that city of unknowns,” though she will choose, pen the words on the slip of paper placed atop the bag far below, she will choose—fingers of wind lifting bleached strands of hair, caressing an ear shot through with holes, the coo of a mourning dove awakened too soon—because she knows, the silhouetted city sprawled out before her, all decisions are right, given time, and she has no choice but to make one, the right one, in
The End.