Off the Soccer Field, Creativity in Cameroon Languishes in Prison 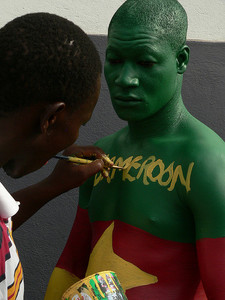 Every four years, a select group of national soccer teams gather to compete on the world stage of sport, seeking to be crowned champions of what the Brazilian star Pelé famously called “the beautiful game.” But the World Cup is not only about sporting achievement. Success at the tournament can also convey legitimacy to controversial leaders, and distract from politics and human rights violations at home.

Cameroon’s biggest cultural export is arguably soccer because of the inventiveness and creativity of its players on the field. The world first recognized this 24 years ago in the 1990 FIFA World Cup, when the team charged into the quarterfinals before narrowly losing out to England in a hotly contested match. Today, players such as Samuel Eto’o and Alex Song play at the most prestigious soccer clubs on the planet, and the Indomitable Lions will head to Brazil to compete once again for the global prize. After 30 years of rule, President Paul Biya would certainly like nothing more than for his critics to root for his country’s success in the tournament and forget about his regime’s human rights abuses. But Cameroon’s victories will ring hollow when one of its most creative voices off the field languishes in prison.

Writer Enoh Meyomesse landed in Yaoundé, Cameroon, after a trip to Singapore on November 22, 2011. As he deplaned, the national police detained him, searched his belongings, and accused him of stealing gold as part of a sophisticated coup d’état against President Biya. The trial took over one year to begin as Enoh wallowed in solitary confinement in the east of the country before he was transferred to the notoriously dangerous Kondengui central prison.  He was sentenced to seven years in prison. No witnesses were called against him and no evidence was presented. His lawyers promptly filed an appeal, but it has been repeatedly postponed because witnesses refused to appear in court.

Enoh has published 15 books of poetry and prose and is a founding member of the Cameroon Writers Association. He has also engaged (unsuccessfully) in politics for decades, making him a target for retribution from the regime.

Working closely with our international colleagues, we’ve been pressing Enoh’s case on multiple fronts. Last year, PEN joined Internet Sans Frontières and Committee to Protect Journalists to file a submission to the UN Human Rights Council [PDF, English / French] detailing Enoh’s case and other threats to free expression in Cameroon, including a wide array of problems related to digital freedom. We also launched this interactive timeline that better explains Enoh’s case. In the beginning of 2013, Oxfam/Novib awarded Enoh Meyomesse its international human rights prize, and our colleagues at English PEN have published an e-book of Enoh’s poetry (free to download, but donations welcome.)

President Biya would prefer that we forget all about Enoh and instead get lost in the revelry of the tournament this summer as Cameroon takes the field. You can TAKE ACTION now to help Enoh before the first ball is kicked.