Notes From the Provincial Town of N 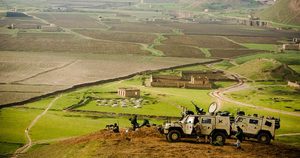 The truth is that Vasisualiy Lokhankin, student, was not that bothered about the elections. For as long as he could remember, United Russia had provided the soundtrack of his life, sometimes less annoyingly, sometimes more. One cold autumn evening Vasisualiy arrived at the bus stop to find a portrait of President Medvedev, bearing the imprimatur of United Russia, unfurled over the entire six-storey high wall of the Actor’s Club. “That takes the biscuit! What are we coming to?” Lokhankin wondered darkly. “Any political analyst who saw that a month ago would have confidently predicted Medvedev was going to be our next president. Today we know it means precisely the opposite.” The next day, giving him no time to develop this thought, the banner had been replaced and now portrayed Putin and Medvedev side by side.

This is the prologue to our story, and now is the moment to reflect on what caused the muffled feeling of annoyance, seasoned with a dash of irony, which the sight of these numerous seals of approval evoked in Vasisualiy and all his friends, suddenly to become less muted. In their provincial town the branding was ubiquitous. At one point, United Russia logos had been plastered over all the local road-making machinery and the newspapers had been filled with proclamations that “the street-widening program is being undertaken on the initiative of the Party…” A local official saw no reason not to admit at a press conference that the work was being carried out entirely within the town’s existing budget. “So what’s the United Russia party got to do with anything?” “Well, they suggested it. Other parties didn’t.” There was no problem reporting this in the state-run newspapers, because nobody saw anything odd about it.

In the dull months of autumn, when people they knew in Moscow were muttering obscurely in Facebook about internal and external emigration, Lokhankin’s friends in N were still not bothered about anything beyond poking good-natured fun, well, perhaps less than good-natured, at the duo, since otherwise they would have had to recognize that their entire lives up to that moment had been spent in internal emigration. Nobody in their town had set eyes on the legendary freedoms of the 1990s, not even in the years before there was any suggestion of Project Putin.

A TV crew had turned up in a village, pulled an ancient lady off the street and asked her how she was going to vote. “For our Fatherland,” she replied. Of course she did. The old lady was not stupid. She had learned how to answer in the purges of 1937 when all the talk was of “the Fatherland” and people knew better than to try coming out with anything more original. Vasisualiy had heard about that era back in 1999 when he was still a schoolboy. At that time, the governor decided to support Luzhkov and Primakov against Yeltsin, and the pressure brought to bear by the anti-Putin party in the twentieth century was in no wise different from the pressuring of the Putinites in the twenty-first, neither in their methods, their ballot box stuffing, the proportion of the vote they claimed, or the kind of people they were.

For Lokhankin the revolution began with news from Mars. At least, it all looked as remote and unreal as if that was where it was coming from. On 5 December 2012, during the spontaneous post-election protests, the forces of law and order beat up a good friend of his in Moscow. The following day this friend kept up a live report on Twitter from his incarceration and Lokhankin went round his friends, saying, “Can you believe it? A month ago I was sitting next to him just like we are now.” Then a friend from St Petersburg phoned and said someone they knew had been done over in just the same way. “The gunfire is coming closer,” our hero said now, experiencing a rush of emotions he had not known before.

The climate gradually changed when the students of N heard a protest meeting was to be held on 10 December. At first, none of Vasisualiy’s friends could seriously imagine attending it. They were well aware that in their town that was tantamount to a one-way ticket out of the university, and possibly even its replacement with a military enlistment card (the more so because everything was being talked up in blogs). Then came mutual goading along the lines of “Why, haven’t you got the guts for it?” A Martian chain reaction culminated in them all xeroxing their passports (on the advice of their role models in Moscow), and seriously cold-shouldering anyone who, for whatever entirely genuine and valid reason, could not join them. Vasisualiy had read that courage, like cowardice, is contagious, and now was uncertain whether this was a tale of courage or cowardice.

The organisers of the rally in N suddenly issued a statement to the effect that they “had not had time to obtain permission to hold the event”. “We take no responsibility for anything that may occur in the town square.” Anybody attending must understand that they themselves would bear sole responsibility for their actions. The organisers even went on to “urge everyone on 10 December to go instead to the skating rink, take a walk in the countryside, breathe fresh, clean air, and with a clear head resolve all problems in a civilised manner.”

Opinions were divided. Some believed the Internet group had been hacked; others picked up the fallen banner of revolution. (“The guys who undertook to organise this protest have decided to stay at home and have copied out a cowardly statement. All it took was one phone call from the FSB for their fervour and civic concern to magically disappear.”) Others started clowning, almost hysterically: “I am texting this from the square … Most people have brought weapons … The party of swindlers and thieves has brought in armored personnel carriers … We are running out of ammunition … Everybody come and join us!” After a brief skirmish, the lily-livered were defeated and put to flight. Vasisualiy Lokhankin and his comrades marched forward, looking a little pale, into the unknown.

The students who went to demonstrate in the town of N had never been to anything of this kind. They were getting a taste of a new life and had no clue as to what awaited them. The only ideas they had about it were a bunch of clichés cobbled together in a few feverish days from Facebook, rumors, and unreliable reports in the newspapers. Finding people they knew in the square, they joked nervously, “Did you just happen to be passing too?”  They formed circles round the statue of Lenin and waited to be teleported into another dimension, at which, from what they gathered from the social networks, the twin capitals had already arrived.

Their clichés, to their great surprise, soon crumbled. In the first place, they were not confronted by the authorities on the rampage. They stared in amazement for a long time at the trucks of the special operations units, which they had never before seen in their town. These, however, remained purely for effect. A young guy who tried to use an unauthorized megaphone was led away. Vasisualiy heard later that the place had been “crawling with people in plain clothes”, but could not picture what people in plain clothes would look like.

In the second place, the town of N boasted no Alexey Navalnys. In effect, the protesters were on their own. They clustered together and chanted loudly. They swarmed together like bees, not knowing who to listen to. Eventually their attention was held by an old Yabloko Party supporter, battle-hardened in the late 1980s and well known in the town. There seemed nothing radically new in that. In the third place, although now and again shouts of “Provocation! Provocation!” was heard in the crowd, there really did not seem to be any.

They left bewildered, with Vasisualiy unsure whether he had tasted of the new life, and if so, whether he was still living it. He was not alone. It is a question everybody is still asking themselves. At all events, he did not go to the next rally on December 24, although some of his friends did. This time no one was goading anyone else the day before in long conversations on ICQ. In any case, the second demonstration in N was a much more modest affair, nothing like those in the capitals, which the following day they were discussing at home. “Did you see? They showed it on the news.” “Never!” “Yes, Boris Nemtsov, and Gary Kasparov.” “They showed them on the news? Wow!” “And did you see Alla Pugacheva’s wedding?”

Perhaps for every action there is an equal and opposite reaction, and if anyone had started arresting, handcuffing, expelling, Vasisualiy would have been drawn much more dramatically into a new era and a different way of life.

But perhaps, too, nobody in the provincial town of N has ever seen a different way of life, so nobody can explain what it was or what it will be like. At all events, Vasisualiy Lokhankin has no way of knowing whether there is life on Mars.