Not Better, but More Humane: On Translating Romain Gary 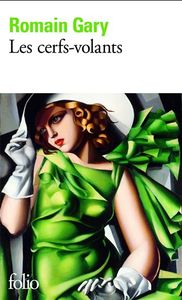 Miranda Richmond Mouillot is the recipient of a 2014 PEN/Heim Translation Fund Grant for The Kites, by Romain Gary. Read an excerpt of the translation here.

Romain Gary. Do you know him? Resistance hero, former French Consul General to the United States, one of the greatest and best-loved French writers of the twentieth century. An author with so much humanity he required several pen names to express it. I discovered him as Émile Ajar, author of La vie devant soi, a book that made me laugh out loud in a silent airplane, until I came to the end, turned it over and began again, and couldn’t stop crying, couldn’t imagine how I had laughed so hard the first time around. That’s the kind of writer Romain Gary is.

His novel The Kites is the only book I have ever skipped work to finish. It’s the story of a young man in love with a woman who sleeps with the enemy; of an imperious chef convinced that cooking for the enemy is the highest form of resistance; of a Jewish madam who becomes the enemy to save her own skin; and a pacifist kite maker who believes there is no enemy.

The Kites is a challenge to translate because Romain Gary fully inhabits his language; he uses every square inch of every word, milking each expression, each cultural reference, for all it can possibly give. He can pack an entire commentary on French civilization into one little pun, the Gallic equivalent, perhaps, of a Zen koan. Gary doesn’t use French—he is French. He once wrote: “It took me a long time to admit that the reader was entitled to a certain amount of consideration and that it was necessary to explain to him, as to every newcomer at the Hôtel-Pension Mermonts, the number of his room, the way the switches worked, to give him his key and indicate where he would find all the necessities.”

The Kites was Romain Gary’s last novel, and lucky for the reader and translator, in addition to working the French language into a delicate, humorous explication of the people who speak it, he furnishes all the entitlements. If novels afford a kind of accommodation to weary travellers, then this one is a luxury suite: poetic, inspiring, and a ripping good story. Like all high-toned lodgings, it demands a certain dignity and bearing of its guests: even as we marvel at the plush fittings and the chocolates on the pillows, The Kites makes certain demands on our minds and hearts—notably, that we lay down any pat or self-satisfied assumptions we might have about friends and enemies, right and wrong, collaboration and resistance. Read this book and you’ll come out feeling, not like a better person, but like a more human one. That’s the kind of writer Romain Gary is.

PEN America Speaks: How We Defended Free Expression This Week

"When you erase the history of a people, you begin to erase their presence in the present... #LGBTQ children are robbed of the opportunity to learn... that there is a rich history of their elders who made the world safe for them." https://rewirenewsgroup.com/2022/12/05/christian-conservatives-want-to-control-classrooms-and-libraries/ via @RewireNewsGroup