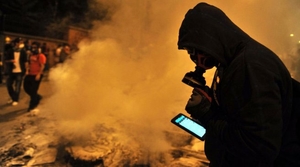 Last week, as Facebook was issuing a statement denying that it had turned over user information on Turkish protesters to the Turkish government, the Turkish daily Akşam was reporting that police gave Istanbul prosecutors a list of 35 people who could face prosecution for insulting Prime Minister Erdogan or other government officials on Twitter and Facebook during the protests.

Facebook’s denial came hours after the Turkish daily Hurriyet and online news service Bianet quoted Binali Yildirim, the Turkish Minister of Transport, Maritime Affairs, and Communications as saying that Facebook had responded “positively” to Turkish government requests for information identifying users who wrote or posted about the Gezi Park protests. According to Bianet, Yildirim told reporters Twitter had refused a similar request for user information. “Facebook has been working in coordination with the Turkish authorities for a long time,” Yildirim said. “They have a unit in Turkey. We don’t have any problem with them, but Twitter can do the same thing.”

“The same thing” apparently means setting up offices in Turkey that are subject to Turkish law. Yildirim said all major social media sites should “come and be a part of Turkish jurisprudence.” “This won’t hurt anybody,” he explained. “When a tax officer or policeman or someone else submits an inquiry, we would like to have a representative ready in our country to provide this. It is not convenient to do this over email, phone, or internet with a representative in the U.S.”

Yildirim’s suggestion that Facebook had this kind of operating relationship with Turkish authorities sparked outrage in Turkey, and the company’s response was swift and categorical:

Facebook has not provided user data to Turkish authorities in response to government requests relating to the protests. More generally, we reject all government data requests from Turkish authorities and push them to formal legal channels unless it appears that there is an immediate threat to life or a child, which has been the case in only a small fraction of the requests we have received.

We are concerned about legislative proposals that might purport to require Internet companies to provide user information to Turkish law enforcement authorities more frequently. We will be meeting with representatives of the Turkish government when they visit Silicon Valley this week, and we intend to communicate our strong concerns about these proposals directly at that time.

Any provider of social media currently in use in Turkey is right to be concerned. Yildirim insisted Turkish authorities weren’t interested in “turning down the volume of social media or restricting it,” adding that “such methods must never be considered” and are “against the nature of things.” He also reminded reporters that the government’s “National Intervention Center on Cyber Events” has established a program called Balküpü (Honeycomb) and that the government has “formed teams that work 24/7 to patrol and monitor cyber attacks and ensure the security of our citizens and the flow of daily life.”

Reports that police have referred the names of 35 people for possible prosecution under insult laws suggest that these teams can do plenty of damage with or without the cooperation of social media providers—and that it is the structure of Turkish law that poses the greatest threat to freedom of expression in the country. Insult laws have long been an issue in Turkey, where writers and journalists still face possible prison terms for insulting the President of the Republic, symbols of the state, or “the Turkish Nation, the State of the Turkish Republic, the Institutions and Organs of the State.” This January, the Turkish PEN Center learned it was under investigation by Istanbul prosecutors for insulting the judiciary for criticizing the prosecution of musician Fazil Say, who was himself on trial for “insulting religious values.”

The European Union has pressed for the elimination or revision of these laws throughout negotiations surrounding Turkey’s accession, and in 2011 the European Court of Human Rights held that the laws proscribing insult to the Turkish nation violate the free expression clause of the European Convention. As the Court wrote in its decision,

In the Court’s opinion, while the legislator’s aim of protecting and preserving values and State institutions from public denigration can be accepted to a certain extent, the scope of the terms under Article 301 of the Criminal Code, as interpreted by the judiciary, is too wide and vague and thus the provision constitutes a continuing threat to the exercise of the right to freedom of expression…. As is clear from the number of investigations and prosecutions brought under this provision … any opinion or idea that is regarded as offensive, shocking or disturbing can easily be the subject of a criminal investigation by public prosecutors.

This, then, is the real issue in Turkey. With the tools to broadcast opinions and ideas now in the hands not just of writers and journalists but millions and millions of Turkish citizens, the question is not whether social media should or should not abide by Turkey’s laws, but whether Turkey will at last amend its laws to protect legitimate, if at times challenging and unsettling, peaceful dissent.