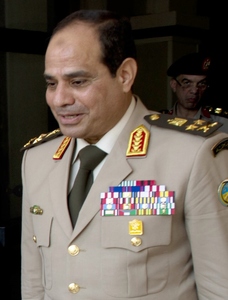 A proposed anti-terrorism bill in Egypt threatens to criminalize the publication of any news that contradicts the government’s official narrative regarding “terrorist operations” in the embattled North African country. Article 33 of the draft law, reportedly approved on July 1 by the Egyptian cabinet in the absence of a parliament and awaiting final passage by the president, prescribes jail terms of up to two years for journalists whose coverage disputes or contradicts official government reports on matters of terrorism, which the bill defines loosely. If passed, the law will effectively bar both local and foreign journalists in Egypt from producing balanced and thorough reporting, limiting them to only one source: the repressive government of President Abdel Fattah al-Sisi.

Egyptians have been riding a political roller coaster since the Tahrir Square protests of 2011 that led to the ouster of President Hosni Mubarak after nearly 30 years in power. Muslim Brotherhood candidate Mohamed Morsi then served just over a year in the presidency before a July 2013 coup d’etat that reinstated a military government with Sisi at its helm. During these transitions, restrictions on press freedoms have been alternately loosened and tightened, resulting in a situation today where more journalists than ever before are jailed in Egypt, according to the Committee to Protect Journalists. Reporters targeted by the regime—like the three Al-Jazeera journalists detained for over a year, among many others—are often accused of being agents of the Brotherhood, a party that has again been outlawed under Sisi.

Terrorist attacks reportedly carried out by ISIS and other jihadi militant groups have also been on the rise in Egypt since Morsi was removed from office. On July 1, 2015—the same day the new anti-terrorism bill was approved by the cabinet—attacks in Egypt’s Sinai Peninsula sparked heavy fighting between Islamic State-affiliated militants and Egyptian soldiers. Government sources reported less than 20 military casualties; local and foreign media, including Al Jazeera, reported upwards of 50. The attack came just days after a car bomb in Cairo killed the country’s top prosecutor, Hisham Barakat. An attack on the Italian consulate early Saturday morning that left one dead and nine injured has bolstered supporters of the new bill, who have insisted it is a necessity to “protect national security.”

The draft law was returned for further review last week after an outcry by the Egyptian Journalists Syndicate over Article 33, which creates the restriction on non-official narratives. (The new Egyptian Constitution stipulates that a poll will be held in the Syndicate during the drafting of any legislations related to journalism, but the provision had not been heeded in the cabinet’s hasty approval of the anti-terrorism bill.) While Article 33 is among the most egregious provisions of the new draft law, the bill also lists more than 25 additional crimes, including “promoting terrorism” on social media, that have not been adequately examined or debated. While the government has said it will reconsider Article 33, it insists that the law in its entirety would exist only to “defend citizens from wrong information” and not to limit media freedoms.

But in a country where just four years ago the media helped usher in a short-lived era of reform, Article 33 risks transforming Egypt’s local and foreign media into regime mouthpieces, or forcing them to cease operations entirely. The proposed anti-terrorism law threatens to fundamentally alter the recording and telling of Egyptian history, erasing the multiple perspectives that have enriched one of the world’s most storied civilizations.